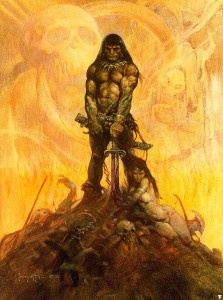 At long last the official web page of the new book imprint I work for has launched, although it’s more of a starter page. There are ambitious plans afoot for what the web site will contain. You can see the beginnings of it here, and if you click around you’ll find a brilliant essay by the brilliant Bill Ward. He’s written a number of essays for the site, and so has the equally brilliant Ryan Harvey, but in its primal form the web site is only showing a few pieces. Nor does it permit comments on the article page, but it will eventually.

You can also see an excerpt from John Chris Hocking’s second Conan novel, Conan and the Living Plague.

While many with the imprint are in Frankfurt this week, I’m editing some more Conan work. And I’m also revisiting some Conan pastiche. I’d never read Conan and the Grim Grey God by Sean Moore all the way through, and you know what, it’s pretty good. I don’t think he quite got some of the feel right, but he comes really, really close. This one of his is definitely going on my best of pastiche list. If the poor fellow hadn’t died so young I’d definitely be pushing to reach out to him for more work. 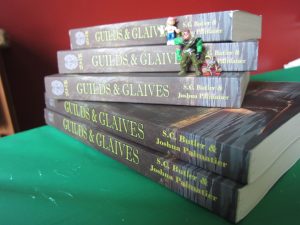 Right here in my own tower by the sea I have contributor’s copies of the mighty Guilds & Glaives anthology. Along with numerous talented folks, my sword-and-sorcery colleagues and fellow Tales From the Magician’s Skull authors Violette Malan (writing of Dhulyn and Parno) and James Enge (writing of Morlock) can be found within its pages.

My story, “The Sword and the Djinn,” is an excerpt from the third, unpublished, Dabir and Asim novel. It doesn’t actually feature either character, but is one of several short stories composed for inclusion in the manuscript. The Maiden’s Eye, when finally complete, is going to feel even more closely tied to the Arabian Nights tradition than the previous works, because it will feature numerous stories within stories. At least, that’s my conception of it. My ambitions were one of the problems with the composition of that book, because how does one maintain pace when stopping to tell additional stories? Lately I think I may have figured it all out, but I’ve been too busy with other deadlines to sit down and do it. 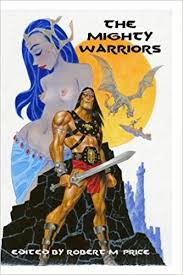 My brand new copy of The Mighty Warriors turned up in the post yesterday. I can’t remember when I had a NEW anthology chock full of sword-and-sorcery. I mean, I’ve had old anthologies that were new to me, but not one that was hot off the presses.

I’ve been friends with two of the authors for years, Charles Rutledge and Paul McNamee. Charles is the fellow who spoke so highly of Shotokan karate and therefore helped me choose which school to attend many years back (and I’m STILL there). I’ve known Paul since I used to edit the old Flashing Swords e-zine. He helped manage the related web site for a while when I was busy with grad school. Yet I’ve never read any of their work! Now I have the chance, because they both have a story in the volume, along with one of my favorite writers, Charles Saunders, my friend David C. Smith. There’s also work by friendly acquaintances and industry standard bearers. I’ve been hearing good things about Adrian Cole’s Elak pastiches for a while, so I’m particularly interested to see what he’s cooked up.

Anyway, I’m pleased to have a copy and eager to get to reading. Your own copies can be found here. 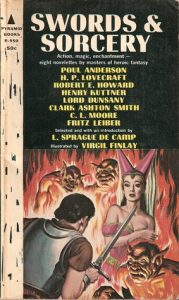 I wanted to point everyone to the new sword-and-sorcery anthology, The Mighty Warriors. My old friend Paul McNamee has a story within — along with David C. Smith and the mighty Charles Saunders and other talented folks– and it is graced with a Bruce Timm cover. Visit Paul’s web site for a lowdown on the table of contents and a good look at the artwork.

It’s gotten me thinking about sword-and-sorcery anthologies and mulling which old ones are my favorites. What about you?

As I’m away from home right now I can’t step over to look at my bookshelf to search through individual volumes. I know I was always a little disappointed in the Flashing Swords anthologies, and fond of the Swords Against Darkness collections. As to single volumes, though, it gets tougher. How to judge? Some are strong collections but hold stuff I have in other collections. Doesn’t mean that they’re not a strong sample of the good stuff… 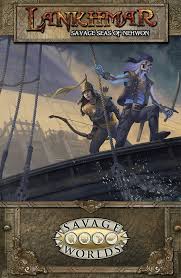 I wrote a Lankhmar book for the Savage Worlds game system, and the Kickstarter for it went live last week.. It’s probably as close as I’ll ever get to writing a story starring Fafhrd and the Gray Mouser.

I had a blast writing the thing, but my favorite parts were designing adventures — which I did my very best to make feel Leiberish — and designing the adventure generator, which seems to create Leiber-like stories well enough that I used it to generate two of the adventures I wrote up for the book.

Check it out — The Savage Seas of Nehwon! 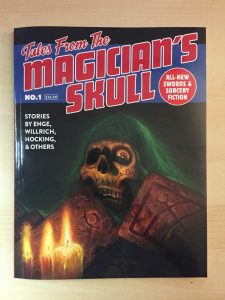 I have the proof — observe, a copy of the issue, back from the printers. Addresses and envelopes and all that good stuff are being printed up and issues should be going out in the next few weeks.

Also, issue 2 has already headed to layout, and we’re now finalizing ads. How’s THAT for some sword-and-sorcery service? 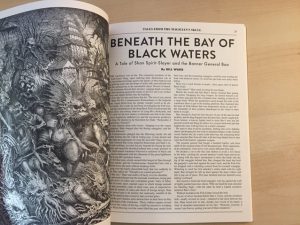 Feast your eyes upon a random page flip, to the right. Oh, look at that. It’s a story by Bill Ward!

This is just the first step. Soon there will be multiple issues of the skull available for enjoyment.

If you missed the Kickstarter, it’s not too late to pre-order an issue. 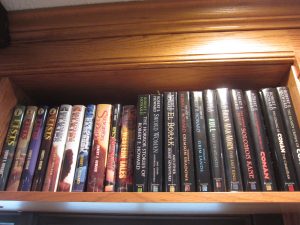 Seems like I’m just going to keep spinning those plates. Poor Bill Ward is still waiting on me to write the next comment on our long overdue Corum post. Chris Hocking may still be waiting for me to get back to writing up something for Wade Miller for our Hardboiled Monday posts, but that’s been so long forgotten that he may not remember.

Meanwhile the Kickstarter is going well and I’m busy behind the scenes working to promote it in various places. I’m also trying to revise one novel while trying to finish writing another. Also busy being that part time house/farm husband, including training a new puppy. None are impossible duties in the least, it’s just hard to do everything at once. 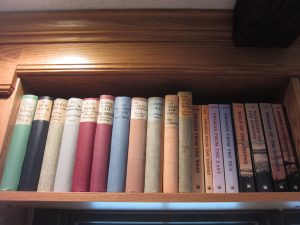 Since I have nothing really to report, I thought I’d fill the post today with shots of various parts of my office/library. Some of the books pictured belong to other members of the family.

And no, I haven’t read all of these, but I’ve sure read a lot of them. Some multiple times. Others are part of the TBR pile. It’s a great thing to look around the office and see all the cool stuff I’m looking forward to reading… 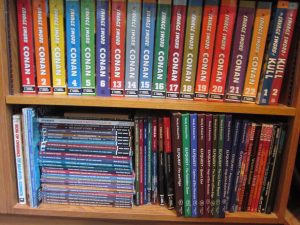 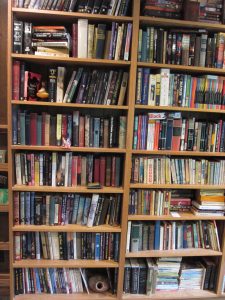 Return of the Sword-and-Sorcery Kickstarter

I know I’ve mentioned this before, but I’m mentioning it again because there are only 26 hours left as I type this, and the Guilds & Glaives Kickstarter is about 2 grand short of its goal. The anthology is going to feature a whole slew of sword-and-sorcery fiction, including a new tale from yours truly, so I have all kinds of reasons for wanting to see it hit its goal.

Add in that if the Kickstarter funds, it will have a few slots open for submission as well, and that might be even more incentive. If you’ve been on the fence, or been meaning to join in but forgot about it, I hope you’ll take a look and think seriously about pledging. 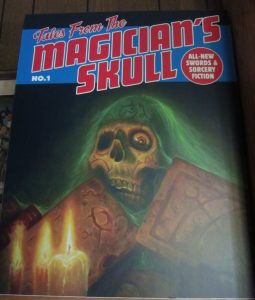 Work continues behind-the-scenes with Tales From the Magician’s Skull as Joseph finalizes the Kickstarter preparations. I can hardly wait to point the way, but you’ll have to wait just a couple more weeks. There are many things about working with Joseph that I like, and one of them is his careful preparation.

I haven’t been reading nearly as much the last month, as my wife and I discovered Parks & Rec, and have been watching it in the evenings. We don’t usually binge watch television like this, but it’s nice to have a positive show about people you like. It kind of feels like the 2nd-5th seasons were the best, but we’re watching to the end. In the shortened 7th season I’m finding myself laughing out loud several times an episode again, even if some of the main plot lines feel a little forced and sometimes indulgent.

But that’s not heroic fiction. I wanted to share something that was, and that’s the Blades books by Kelly McCullough. I’m most of the way through one of them, Bared Blade, and it reads something like Zelazny and Chandler co-writing a fantasy detective story in ancient China. Except that by “detective” I mean that there’s a problem to be solved and a sort of professional trouble-shooter who’s a former assassin for the goddess of justice. That means that, unlike so many other blokes in cloaks, he was only offing the bad guys. Aral is a force for good, or at least strives to be, the fantasy equivalent of Chandler’s knight in the battered trench coat working his weary way through a corrupt but beautiful city.

Anthologies vs. Novels vs. Magazines

Last week, at the bottom of a post announcing a Kickstarter (which you should totally back if you like sword-and-sorcery and especially if you dig my stories)  a number of us started chatting about the strange problem with short stories vs. novels in today’s market place.

Novels simply sell better. Anthologies, even if they’re all about a popular character from, say, a series of novels (like Harry Dresden) don’t sell as well. I’ve often thought that strange; busy as we are these days, with so many distractions, it seems counterintuitive that people aren’t more interested in sitting down with a short story right before bed.