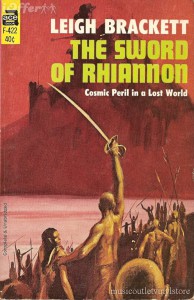 As I work away on various projects, I thought I’d link back to some earlier posts.

First, having just re-read “Queen of the Black Coast,” I recently revisited observations Bill Ward and I had about an earlier re-read. Bill knocked this one out of the park.

Second, Bill and I looked at a great Brackett story, “The Moon That Vanished.” We’d meant to analyze more, but we’ve both gotten pretty busy.

Lastly, here’s a post I penned back in 2013 discussing and contrasting the way Jack Vance and Robert E. Howard depicted women in their fiction. I don’t want to spoil the post, but I have to say that after binge reading a huge amount of Vancian fiction I hold even more strongly to my conclusions, and came away with some rather icky observations about some plot preferences Vance liked to return to again and again. And I don’t think they were employed, like some Robert E. Howard features, because he knew it would get him a cover. (If you’re not in the know, REH figured out that if he wanted a cover illustration for Weird Tales, the editor would be highly inclined to give him one if he put a whipping scene in the story. I can’t say for sure whether that actually meant more sales, or if it’s something that editor really enjoyed.) For all that I love Vance’s amazing world and culture building, he repeatedly has young women, just barely mature, being raped. Sometimes it’s depicted as “lighthearted” and one time it preceded the woman’s death. 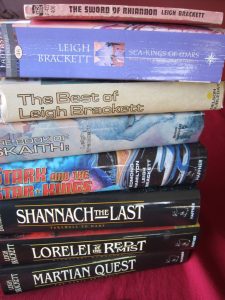 I’ve read an awful lot of the work of Leigh Brackett, and much of it multiple times. I thought I’d share a photo of some of my favorite of her books.

On the top there is a great short novel, one of my very favorites by her. It’s actually included in the Sea-Kings volume immediately beneath it, but the version in that collection had so many typos I went out and re-purchased another version of the paperback I sent away to Joe McCullough, because when I’m re-reading one of my favorite stories I don’t want to be distracted by errors.

I mentioned the excellence of the compilation beneath it just last week (except for typos). The titular “Best-of” book was compiled by Brackett’s husband and is another one-stop shopping for a sample of Brackett’s best, although neither it nor Sea-Kings has ALL of her best. 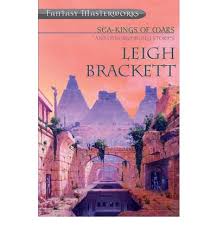 One of the finest anthologies I happen to own is Sea-Kings of Mars, which collects most of Leigh Brackett’s best short work. Not ALL, but it’s a great sampling. I’d only replace one or two of the weaker ones with other favorites of my own. If you happen to see a copy, grab one, because it’s out of print and prices seem to be climbing.

If you don’t prefer to have a book, you can get an e-copy of Leigh Brackett’s stuff from BAEN’s online site for ridiculously cheap prices.They also have a collection titled Sea-Kings of Mars, but it’s not the same collection. It’s still good, though. 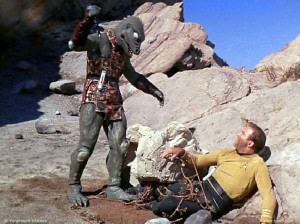 Matthew, this is a Gorn. Note opposable thumbs.

Even if you haven’t fallen in love with the work of Leigh Brackett, you can get a sense of what a great writer she was if you swing by for a visit. And poke around a while there, because there’s other cool stuff to be found as well. 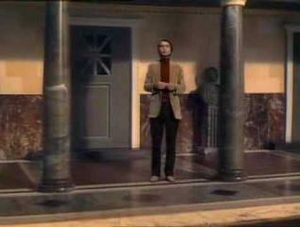 Many moons ago, back when I blogged as BG_Editor (that’s Black Gate editor), I took a little trip to Universe R. I talked about that trip in an article I wrote for Steven Silver, but I’ve never mentioned it on this blog, and I thought it time.

When it comes to the parallel universes we visit in speculative fiction, some of my personal favorites are the ones where Rome never fell, the one where Spock has a goatee, and Universe R.

I imagine a lot of you have thought about it. It’s that place where great artistic works were never lost. It’s the land where overlooked, forgotten, or under appreciated poets, playwrights, authors, and artists were encouraged and celebrated and lived on to craft more work. I don’t mean the egoverse where you’re the top of the charts or have written a chain of bestsellers – this universe is for the artists you wish had gotten a better deal. Universe R can’t be completely logical, of course. For instance, I’ve been lamenting the destruction of the Library of Alexandria since I first learned of it – and especially after I saw Carl Sagan walking through it in Cosmos – but if the Library of Alexandria had survived, we’d probably be further along with a lot of developments and some of the later artists who prospered in Universe R might not ever have been born. You can’t worry about Universe R making that kind of logical sense or the whole thing falls apart.

Bill Ward and I had been meaning to get back to our re-read series at some point last year, but we both got busy. And so we decided to start the new year with a read of one of my favorite Leigh Brackett stories, “The Last Days of Shandakor.” It was the third read for me, but Bill was new to the tale, and so was Fletcher Vredenburgh, who we invited aboard.

Brackett, of course, was an adventure fiction pioneer and one of the main reasons that the pulp Planet Stories is remembered today (although this particular tale originally appeared in the magazine Startling Stories). She was writing grand space opera/sword-and-planet/science fiction/fantasy back in the ’50s and ’60s and continued doing so right until the end of her life, and sometimes it seems like that footnote (that she completed a first draft of The Empire Strikes Back) has overshadowed everything else she did. It shouldn’t, though. She was writing about complex characters who could easily have rubbed shoulders with Han Solo or Mal Reynolds decades before those two were ever invented. All of her tales are infused with a real hardboiled grit and… well, heck, maybe I should stop introducing and just get onto the discussion. 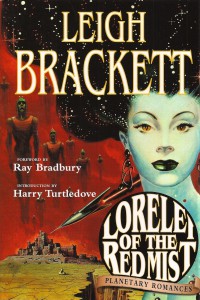 I rose bleary a little too early this morning and read the sad and somber story of “The Last Days of Shandakor” by the incomparable Leigh Brackett. Shortly Bill Ward and Fletcher Vrendenburgh and I will be discussing it on the site, so if you have a copy of the tale I hope you’ll join us. It’s found in several Brackett collections, among them the nearly perfect “best-of” paperback Sea-Kings of Mars and the absurdly affordable Martian Quest e-book.

I say nearly perfect because A.) It contains NEARLY all of my very favorite Brackett short stories. I’d take out one or two and replace them with others, but it’s a great one-stop if you’ve liked Brackett and want to get a better sense of her before plunging into buying the expensive Haffner Press hardbacks. I own them, but I might not have if I hadn’t been familiar with this volume already.

B.) The darned thing has irritating typographical errors, the kind that crop up when the original  manuscripts have been scanned and then not proofread carefully enough. 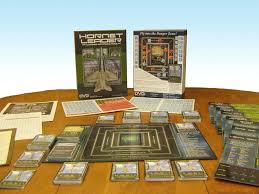 With the cold snap in full swing I’ve been looking into my game closet at the increasingly large stack of games-to-be-played. It’s not nearly as high as my books-to-be-read pile, but it’s starting to get embarrassing. Some of these games are pricey and took a lot of effort to track down (they were out of print) or to get trade deals for. And yet many are unplayed or even in shrink wrap, on the off chance I decide I want to trade them away for something else.

I’d been thinking that my collection was starting to get out of hand, but after I poked around a bit I realized that I’ve got nothing on the real game aficionados. I have a few dozen — some friends, acquaintances, and like-minded folks have HUNDREDS. But then maybe they collect those rather than cats or porcelain figurines, and maybe they don’t have other hobbies. 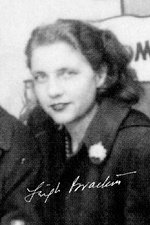 It’s been a madhouse here with me working pretty much night and day towards a book deadline, so my weekly posts have been greatly reduced.  I should have things back to at least three updates (hopefully interesting ones) a week, possibly THIS week.

Right now I need to go make some final adjustments to some action sequences, but I wanted to leave you with some links to other Leigh Brackett articles that popped up over the last few days.

The web site of Keith West

The web site of Don Herron

The web site of Sarah Hoyt

Leigh Brackett: “The Moon that Vanished”

The great Leigh Brackett was born 100 years ago today. She put Adventure into planetary adventure the way few others did before or since, painting her settings with astonishing color and details that never detracted from the story. I’ve written about this in detail here, if you’re after a few samples of her prose and a light discussion of her technique.

Today, though, hopefully you can join Bill Ward and me in celebrating Leigh Brackett by discussing one of her great stories, “The Moon that Vanished.” If you missed the announcement last week, you can still join in by grabbing a copy of the story inexpensively. You won’t regret it.