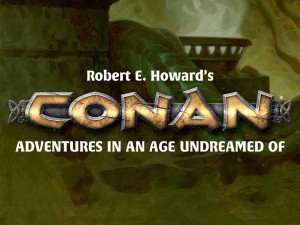 I’m really torn. Have you seen this? It’s already blown through its initial funding AND a couple of stretch goals and it’s just launched.

The trailer looks great. The people involved are top-notch, and some of them are my friends. Given my love for the Hyborian Age, it seems like a no-brainer… but I have SO many game systems already, some of which emulate a sword-and-sorcery vibe quite well, AND while I would love to play in such a game, I’m not sure that any of the people I game with are even half in love with the setting and character as much as I am, particularly my wife. I love her madly, but she has little appreciation for Conan or REH. And that means this game would probably end up as a glorious shelf decoration.

My other worry is that If I do sign on just so I can have this great looking book on my shelf, I’ll feel compelled to buy all the other books as well, and I’m  leery of falling into that particular pit.

Have any of you out there played the system it’s using? I’d be curious to hear your opinions on it.