A Guile of Dragons 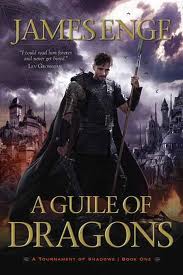 Most of the weekend was spent working away on house-type stuff, although I did manage to revisit some favorite bits from The Arabian Nights. I wrote one of those stories up (“The Wily Dalilah”) over at Black Gate this morning, and I’ll likely be talking about more tales in the coming months.

Today, though, I thought I’d call attention to the work of my friend James Enge. Like me, he had a serial character appearing over at Black Gate before that character appeared in a series of novels from a major publisher. Well, James’ fourth novel of Morlock the Maker was released in early August, and if you like your fantasy mixed in with sly wit, clever word play, horror, and great action set pieces, then you’re late to the party.

This time James is writing Morlock’s origin story, so we’ll finally learn how Morlock came to be who he is. A Guile of Dragons is set before the first three books, and is the first of a trilogy, although you shouldn’t dread the word. Like the first books these will standalone, although they will build upon one another.

Did I mention that Enge was nominated for a World Fantasy Award? I should have.

I once had a dream that my characters, Dabir and Asim, were standing near a swimming pool talking with Enge’s Morlock. I mentioned that to him and he said it wasn’t beyond the realms of possibility that the conversation could happen, as Morlock might be able to world hop.