The Whys and Wherefores of Convention Going

As I was contemplating my departure for Worldcon/Chicon in just a few days, I realized that I was eagerly anticipating the convention. And I wondered how I came to be THIS guy, looking forward to seeing old friends and acquaintances and meeting new ones, because when I drove off to my first convention I was confused about exactly what I was doing and why I was going, and more than a little nervous. All I knew is that I trusted the advice of my friend E.E. Knight. He assured me that I really needed to start attending conventions, so I went.

I didn’t used to  know why someone would want to go to a writing/reading convention. I knew they existed, but I knew plenty of writers and readers and reasoned I didn’t need to go meet any others. After all, it was a long drive, and I’d be among strangers. (I used to be a lot more introverted until I got old enough to be comfortable in my own skin.)

Here’s the simplest answer — if you want to be a part of the industry, attending a few conventions every year is one of the best ways to become acquainted with it. If you’re already involved in the industry in some capacity, then attending a convention is a wonderful way to get to know other writers, editors, publishers, and journalists. Face time makes a lot more difference than you’d think. It’s possible, for instance, to find yourself at a late night party and suddenly realize you’re talking to an editor who sounds curious about your book. Ending up with a business card and a contact is much better than making a bunch of unsolicited submissions.

Will you feel overwhelmed? You might. Attend with friends the first few times, because you will be surrounded by people whom you don’t know, or whom you admire so much that you have trouble speaking with. 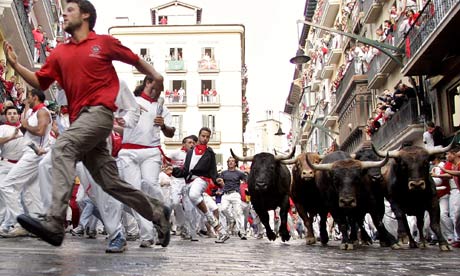 A Tor editor (in red) pursued by writers eager for novel contracts outside a Spanish convention.

It can take a while to get over that, which is why you shouldn’t wait until you’re out trying to promote your first book to start hob-nobbing at conventions. You should attend before so you feel more comfortable with conventions in general. So that you KNOW people. You can show up to their readings and they can show up to yours so that none of you are giving book readings to empty rooms.

If you’re wanting to talk with fellow fans and scholars about particular works or bodies of works, or learn some behind-the-scenes facts about the industry, or pick up some advice on writing and publishing, there are many fine convention panels. Quality varies from panel to panel, of course, but they’re so free-wheeling and interactive you’re bound to hear things that you might never have heard about the industry, and learn some anecdotes and pick up some wisdom that might not be cataloged anywhere else.

Why else should you attend? Well, writing is a solitary business. It can be a real pleasure to get out and talk with people who’re experiencing the same trials that you are. You can commiserate, offer advice, and share jokes and experiences that people who aren’t writers won’t get.

I just have one caveat — don’t press. Don’t be that gal who runs into the bathroom stall after her favorite editor and slides a manuscript under the stall. Don’t seek out all the important editors and pitch your book and ask for a card. Play the long game. The more conventions you attend, the more people you’ll know, and then introductions and connections become simpler. I wouldn’t say that they necessarily fall into your lap, but when they occur they’re far less pressured. And you will surely make a better impression if you’re more relaxed.

Some day you might even find yourselves looking forward to going and spending time among friends and colleagues.