Hardboiled Monday: The Mouse in the Mountain

Today we’re looking at Norbert Davis’ The Mouse in the Mountain. 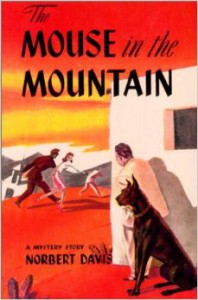 Chris: Davis is widely regarded as one of the few authors able to mix straightforward humor into hardboiled fiction.

With a style that was sharp, lucid and wry, Davis could draw surprisingly effective humor from relaying a realistic conversation or describing a simple situation.  The oddities and simple difficulties of human communication seem to have fascinated him.

Here’s an exchange from his short story, “Something for the Sweeper.”

“Hi,” said Jones, stopping and standing on his left foot.

The man made another dab with his broom, inspected the result, and then looked up at Jones. He was an old man, small and shrunken and wiry, with white, smooth hair that was combed straight back from his softly plastic face.  He nodded silently at Jones, solemn and wordless.

The old man sniffed and rubbed his nose. “Who?”

The old man considered for a moment.  “Live where?”

Jones stared at him sourly.  “Thanks a lot,” he said at last. 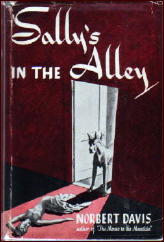 So you have this calm transcription of a realistic, yet pretty silly, conversation, and a page or two later you get sharply described danger and violence, with sentences like…

The knife was a flat hissing glitter coming at Jones.

You have to wonder how the author was able to balance these polarities as well as he did.  He does an especially fine job of this in his novel, The Mouse in the Mountain.

Howard: Possibly because of the abrupt shift in tone between this and other entries on the list I didn’t take to this book as quickly as I had some of the others. I was amused by the dry, understated wit in the dialogue of the opening scenes, but it took me two tries to really get involved. It proved entertaining, with a good mystery and engaging characters. I wasn’t compelled to immediately seek out the further adventures of Doan and Carstairs, although I was sufficiently impressed with author Davis to pick up a collection of his short stories about the detective Max Latin. I may eventually try out Sally in the Alley, and I can see myself re-reading sections of Mouse, if not the entire book.

Chris: In this novel Doan, a physically unimpressive detective, travels to Mexico with his dog, a very physically impressive Great Dane named Carstairs.  There is a hunt for a fugitive from the USA, a Mexican bandit, three murders and a memorably described earthquake.  The overall effect is a pleasingly breezy, fast-paced read broken by swift jolts of suspense and danger that somehow seem all the more intense against the light background.

Howard: I’d completely forgotten about the earthquake, a fine example of Davis bringing a moment to life with incredibly precise prose. You’re absolutely right in your description of the overall effect — not every hardboiled detective needs to read like an homage to Hammett or Chandler. Davis succeeds very well in carving a place for himself. His delivery is droll and sometimes made me smile, but I think what I liked about him best were the succinct flourishes he used to describe a moment or a person or an action sequence. 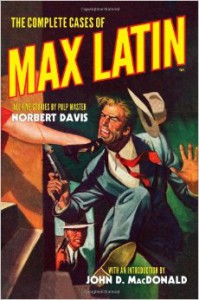 I enjoyed him, and I think with further study I can learn from him. My guess is that I’ll enjoy his shorter stories so I can take the comedy in smaller doses.

Chris: I put Norbert Davis on the list because I thought his work showed how the world of classic hardboiled fiction was more diverse than might be expected, because I thought it was a great deal of fun, and because I don’t believe there is another author in any genre quite like him.

Howard: Humor’s a tricky thing and it may be that I’m a hard man to please. I recall that when my friends were laughing roundly and passing around A Hitchhiker’s Guide to the Galaxy I found it occasionally amusing, not hilarious. Your own mileage may vary with The Mouse in the Mountain, but Chris is right in that Davis can infuse noir with humor, certainly no easy trick.

Chris: I’m compelled to offer an odd aside.  When I worked in a big bookstore in a college town philosophy students came in now and again looking for books by Norbert Davis, all of which were out of print at the time. It turns out that philosopher Ludwig Wittgenstein was a fan of Davis and especially of The Mouse in the Mountain.