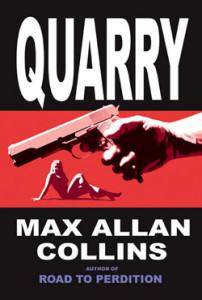 Today we’re looking at one of the book series by famed mystery and suspense writer Max Allan Collins, Quarry.

Chris: Although Collins once wrote me that the Nate Heller series was his most significant work, I still prefer Quarry. The early novels about this dark protagonist translated the day-to-day reality of the 1970s into lucid, matter-of-fact prose in the same fashion that Gold Medal Originals often did for the 1950s. 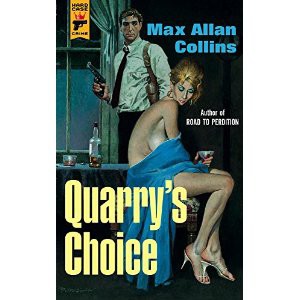 More to the point, Quarry is a top drawer anti-hero, a remorseless hitman who often finds himself pitting his lethal skills against characters more reprehensible, if ultimately not quite as dangerous, as he is. Leavened with plentiful black humor, casual sexuality, and sharp blasts of abrupt violence, these novels read with great speed and often feature endings with an extra wicked twist.

I confess a peculiar fondness for stories in which the protagonist is a dangerous, scurvy bastard pitted  against characters who are even worse.  Maybe it’s because my Dad took me to see Fistful of Dollars when I was seven. In any case I was pleased when Collins began producing new Quarry novels in 2006 (the first four appeared in 1976 and ’77).  The eleventh Quarry novel, Quarry’s Choice, is set to appear in January, 2015, from Hard Case Crime.  I predict that I will buy it (as usual), vow to save and savor it (as usual) then read it as quickly as possible at the very first opportunity (as usual). 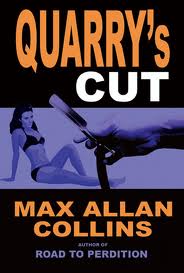 Howard: Technically my interest in Quarry pre-dates the creation of the list. Like the Westlake/Stark Parker books, if I wasn’t already reading them, Chris would have slipped them into the master list because they’re top notch. They’re actually the second set of hardboiled books I read. I’d finally gotten around to trying the Parker series, devouring it while I was laid up after a knee surgery, and I called Hocking to ask if there was anything with the same tone and of similar quality.

“Well,” he said, “there is one thing that’s like it in a way…” He was right. When I first started reading Collins I wrote that he was: “impressing me more and more, sort of the way Donald Westlake/Richard Stark did, in that the more I read of his work the more I come to appreciate how finely tuned the engines are in what seem, upon first glance, pretty simple vehicles. They’re not really simple at all, no more than a still life by a master painter is simply a snapshot of a bowl of fruit.” 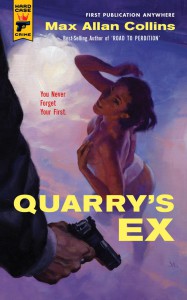 The overt sexuality and the first person narration — which allows you a good look into the mind of Collins’ protagonist — makes Quarry novels different from the Parker books, as does Quarry’s profession, but the skillful variation on the theme and the capable, compelling way that Collins interests you in what happens to a character you probably shouldn’t be rooting for has a lot in common with what Stark did with Parker.

Odd as it may seem, despite the fact that Quarry is a hired killer you find yourself liking the guy. He tips well and sympathizes for the plight of the working man. He likes good genre books (like Leonard’s Valdez is Coming). In a lot of ways he’s an opened-minded guy and is quite relatable. Except for, you know, brutally eliminating humans without remorse. He questions sometimes, sure, but he feels no remorse.

Chris: It did occur to me that some readers might find the Quarry novels were not to their taste.  Their unreconstructed, old school manly narrator may rub some the wrong way, as might the relaxed 1970s style sexuality, or Quarry’s equally matter-of-fact willingness to kill people.

The books first made their appearance in the era of “Men’s Action Adventure” novels, and sat on shelves not far from The Executioner, The Death Merchant and umpteen other lethal, masculine heroes.  But while Quarry may share some of the basic attributes of these characters, his adventures bring something more to the reader, something richer and somewhat paradoxical.The best Quarry novels have a powerful noir surge. 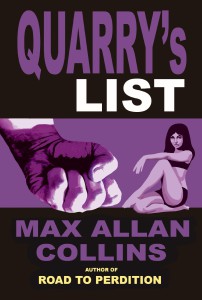 The second book, Quarry’s List, may not be the finest in the series, but it ends with a dizzyingly dark twist in which the narrator performs what I can only describe as a cruelly violent act of mercy and kindness.

Given this noir element it’s striking that the books consistently feature a steady stream of black humor.  Sometimes the humor is understated, sometimes in-your-face, but it gives the series a wry, self-aware sensibility.

This combination of grim noir and black humor suffuses fast-moving plots awash with violent action, sex, mystery, intrigue, and double-dealing, creating some pretty distinctive entertainment. Not for everybody, sure. But I’ll take all Collins will write.

Howard: I’m right there with you, and I’ll definitely be trying out some of his other work now as well. You mentioned earlier that the Quarry novels read with great speed and I have to concur. Collins has the ability to relentlessly pull you forward. I’ve read every one of these and I’m still trying to figure out exactly how he does it… Once you start they’re nearly impossible to put down.

In any case, for all of the reasons Chris and I cited above, I’m awarding Quarry a star, just as I’ve awarded my very favorite books/authors/series from the list. If you like this kind of noir, Quarry is a must-read.