Hard Boiled Monday: You Play the Black and the Red Comes Up 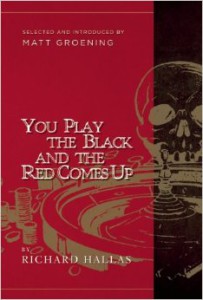 Today Chris and I are looking at a remarkable novel by Richard Hallas writing under the pseudonym Eric Knight titled You Play the Black & the Red Comes Up. 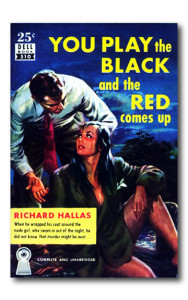 Chris: Repeated readings have deepened the often conflicting impressions this novel makes upon me. It was written under the Hallas pseudonym by Eric Knight, an Englishman who would pen the romantic bestseller, This Above All and the kid’s classic Lassie Come Home before dying in a plane crash over Surinam during the Second World War.

The book was apparently a minor bestseller in 1938, though after its initial hardcover appearance it had to wait until the 1950s to appear in paperback as a neat little Dell mapback. Then it waited thirty-odd more years for the noble, lamented Black Lizard Press to bring it briefly back into print. I’m pleased to say that it’s available today from Pharos Editions with an introduction by, of all people, Matt Groening. 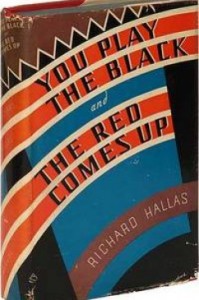 It’s tough to make a solid evaluation of this book. It’s something of a pastiche of the American hardboiled novel of the ’20s and ’30s. It’s part James M. Cain, part Ernest Hemingway, part pulp crime novel, at times self-mocking farce and at others surreally sincere.

Hallas mocks some of the characters he depicts, making them shallow, goofy, drunken, and self-absorbed. At times he seems to mock the terse, blunt prose style he affects. Sometimes this is funny, and sometimes it isn’t.

This unevenness of tone may have been more or less apparent when the book was new, but I think the novel’s highlights, its virtues, must have been as obvious then as they are now.

There is murder, duplicity and a searing look at Hollywood featuring what is probably the first mad movie director in fiction. There’s a frame and a trial and a sense of justice twisted beyond any recognition.

And then there’s the narrator, a tough, forthright young man whose essential simple-mindedness imposes no limit on the depth of his feelings, or on his need to understand. The bluntness of his style is at times played for laughs, but there are plenty of instances where his words have a compelling honesty and even a rough beauty. The dialogue is excellent and used to lift a number of scenes to heights beyond what most anyone would expect of the novel.

There is a sequence in which the narrator is playfully urged by his lover to explain how he feels about her, to compare his love to other things he values. His determinedly relentless catalog of the things his love is like is both humorous and wrenching. Anyone who has ever groped for words when they were needed most will understand. There are a number of scenes which display the narrator’s emotions in a powerful, subdued fashion, the voice of one who speaks little, and has small faith in words.

The conclusion is surreal , enigmatic, moving, and has generated some debate down the years. I’ll say no more about it except that it haunts me.

It occurs to me that I’ve read this book at least four times and that I’ve picked it up to find and re-read specific scenes more times than I can tell. This is one of the very few books that I return to over and over, especially when life becomes difficult. I’m not entirely sure why, but I am sure that I would not be without it.

Howard: Chris describes the novel’s strengths, weaknesses, and overall tone so eloquently that there’s very little for me to add.

This was a beautiful and moving book. If it didn’t touch me nearly as deeply as it has Chris, that’s probably because I’ve discovered while reading the entries on this list that I prefer hardboiled stories to noir. This novel is Bleak (note the capital) and powerful and haunting, but I’m not sure it’s one I’m eager to revisit.

On the other hand, I’m keeping my copy of You Play the Black and the Red Comes Up, which is certainly a mark of respect. I don’t bother holding on to books I don’t plan to re-read any more.