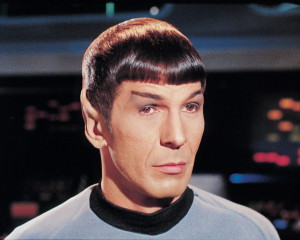 I’ve debated even tackling this subject. There have been numerous moving tributes to Leonard Nimoy already, including an excellent one penned by Thomas Parker over at Black Gate. Then there’s the fact I never knew Leonard Nimoy and I feel a little silly commenting upon the death of a celebrity.

But when I take into account how much the original Star Trek meant to me when I was a boy and a young man and how fond of it I remain, and when I consider how much impact Star Trek had upon my moral development, I think pausing for a moment with bowed head is more than justified. 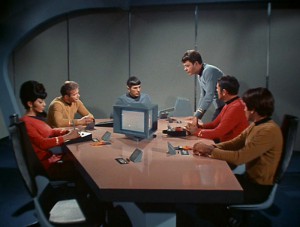 Gene Roddenberry, Star Trek’s creator, called Leonard Nimoy the conscience of Star Trek, and there’s much to be said for that. Anyone who’s enough of a Trekker to have read the behind-the-scenes stuff like me knows how instrumental Nimoy was in inventing Vulcan society and culture and knows how he strove, even amid the mostly dreadful third season of scripts, to keep Spock logical and consistent.

I read a number of remembrances and appreciations of Mr. Nimoy in the days following his death, and the majority of writers said Spock was their favorite character because they could relate best to him. That wasn’t me. I knew I could never be Spock. I thought I could emulate Kirk. Not because of the womanizing, which is actually rare in the good episodes, but because of his leadership style. He was clever, resourceful, compassionate. He put his friends and his duty first. And one of those friends, perhaps his best friend, was Mr. Spock. If I could never imagine actually BEING Spock, I longed to have a friend like him who was loyal, dependable, and brilliant. 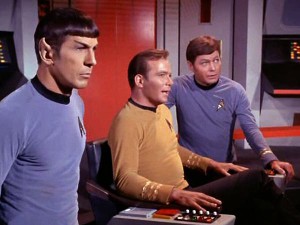 Nimoy did many other things besides being Spock. He led a long, successful life, which is probably why I didn’t end up mourning him as much as I’d expected. And perhaps, as my wife has said, I knew that his work lives on. Neither she nor I mean that Spock lives on because of the new movies, which really don’t get Star Trek or its characters, but because of the original show and, to a lesser extent, the movies with the original cast. Nimoy’s dedication is there for all to see.

Later generations already don’t understand the budgetary limitations of Star Trek — they find the effects campy, as though it was deliberately cheesy, when at the time it was the best that could be done. They don’t understand that Trek was frequently producing a script that had JUST been written and possibly hadn’t been perfected before it was time to shoot. And many today certainly don’t get how far advanced Trek was in so many ways that we now take for granted — no characters who smoked, women department heads, different races co-existing peacefully, etc. Even those mini-skirts were seen by the women who wore them on the show as liberating rather than sexist. 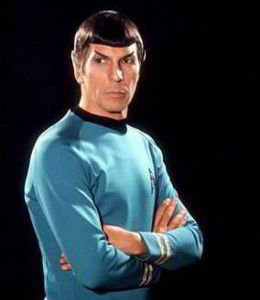 We can’t expect new generations to understand our touchstones. Or, at least, we shouldn’t. But I can hope that the actors who inspire my children have the same commitment and integrity as those who inspired me. To Leonard Nimoy, those weren’t just lines on the page. He insisted that some scenes be rewritten or even added, not, as some actors might, because he wanted more limelight, but because he wanted his character consistent, intelligent, deductive. And human, odd as that sounds. Those who aren’t fans probably don’t understand that beneath that cold exterior Mr. Spock was fiercely loving and protective. It was Nimoy’s gift to portray that subtly, usually by inches.

Leonard Nimoy was a key component in Trek’s vision of a far future, one full of talented, intelligent, devoted people. Millions of people know his name, and hundreds of thousands, at least, from all walks of life, respect and appreciate his work as Mr. Spock. He inspired us, and we are grateful to him. I can imagine what Star Trek would have been like without him, but I don’t really want to do so. Gene Roddenberry chose the right Vulcan for the job and we are all better for it.

I extend my condolences to his friends and family. Had I ever had the chance to do so, I would have joined the long line of people who thanked Mr. Nimoy for his hard work and commitment to the role that he embraced so fully. And now, because I can no longer wish him a long and prosperous life, I shall say Hail, and Farewell.