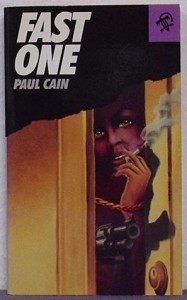 I remain disappointed that there was so little interest voiced about the Howard Browne book from last week. As far as I’m concerned, that’s one of the finest books on the entire list, but I think we got more FB Likes and comments on that silly Spam Haiku post on Wednesday. If you somehow missed our discussion on The Taste of Ashes, take a look. And if you like this stuff, by God, order a copy of the complete Paul Pine detective stories from Stephen Haffner. Just trust me on this one.

Today we’re looking at Fast One, by Paul Cain. 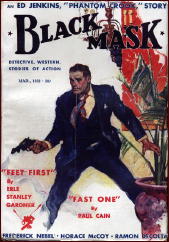 This WAS a fast one. A blizzard of events swirls the central character, Kells, into a series of political and criminal machinations. He then does his best to twist things to his own advantage. The only problem is that he may not know when to stop, and he has this nagging character flaw for a criminal mastermind – he’s loyal to his friends. This novel is terse, brutal, powerful, unforgettable.

Chris: In the indispensable review collection 1001 Midnights, Bill Pronzini wrote that by the time this Black Mask classic comes to its relentless conclusion the reader can feel a sort of “breathless despair,” and this strikes me as weirdly accurate.  Commonly considered a benchmark in the ultra-hardboiled, terse style made famous by Hammett, Fast One is stripped-down, sharp and merciless as a stiletto.  The narrative hurtles along through all manner of gritty, eminently believable scenes of Depression-era lawlessness with such clipped speed that the reader cannot lose focus on the page for a second for fear of missing something.  It’s exhausting, an example of style taken close to its limit, but it is a novel that, once read, is never forgotten.

Howard: Didn’t you tell me that Hammett had called it the North Pole of hardboiled — that you couldn’t make something any more terse and still decipher what was going on? And yet, oddly enough, I found myself more attached to Kells than I’ve so far been to Hammet’s heroes –either Spade or the Continental Op. Despite the fact he’s a criminal, there’s a certain warmth to Kells. How does the rest of Cain stand up to this lone book?

Chris: Chandler described Fast One as “some kind of high point in the ultra hard-boiled manner.”  I can’t recall who said the novel was the North Pole of hardboiled writing, meaning that once you got to the North Pole you simply couldn’t go any farther North, that the book took that style just about as far as it was possible to go.
Cain’s short stories are excellent and there are only a handful of them.  Sharp, cold little things that reward re-reading.

Here’s a link to a book collecting all of Paul Cain’s stories from the great Black Mask magazine.