A Prayer for Heroes 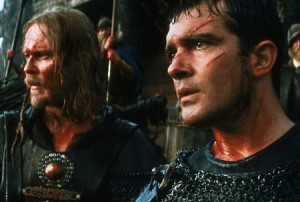 I sat down the other evening with my wife and son for my second viewing of The 13th Warrior. I hadn’t seen it for a long while, and I discovered I enjoyed it just as much or more than I had the first time.

I was surprised to learn that it had only a 33% fresh rating at Rotten Tomatoes and that it hadn’t done at all well in the cinema. It’s a very fine story of heroic adventure with comrades-in-arms, with some honest-to-goodness chills, thrills, and mystery. At least that’s my opinion. It’s one of the better heroic movies filmed in the last quarter century. God knows I’d rather watch it a few more times than, say, Conan the Destroyer. Apparently I’m out of step with the consensus. I flipped through the various negative reviews and shook my head at the comments and lack of appreciation. As an adventure story it does so many things right that many movies do wrong… but that’s not what makes it great. For all the in-your-face violence, much of what happens is understated, including character development and the themes of heroism.

My wife likes the movie but even she thought that the final moments of Buliwyf’s life strain credulity. I responded that his final moments must strain credulity or they would not have come down to us even in distorted form, and that real men and women have done amazing things — I’ve written about Audie Murphy on this very blog. His own feats were so amazing that Hollywood actually had to tone some of them down for his biopic.

The Viking prayer from the movie (apparently invented for the movie, for the version from  the book — Michael Crichton’s Eaters of the Dead — doesn’t sound nearly as good), encapsulates the Norse approach to life and heroism so nicely that I took the trouble to put it to memory the last time I saw the film. It speaks of the awareness of an individual’s place in society and the necessity for bravery in a land where death comes to all. In other words, a prayer that might suit all brave men and women. It is introduced near the start of the film, when the character through whom we experience the movie, Ahmed, still sees the Viking culture as foreign and barbaric. By the end of the movie he has become  a brother to the other heroes, and as a result the moment when he joins in the prayer before the final battle against overwhelming odds is perhaps the most stirring in the movie.

That’s great stuff. I’m working on an oath some of my characters swear in one of my new book projects, and I keep this in mind as I hone it. I still don’t have anything half as good.