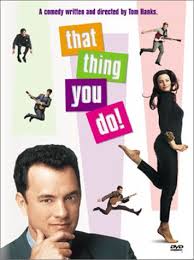 Mostly that thing I’ve been doing is getting the house ready for two birthdays. Owing to my son’s immense high school homework load there was no real birthday gathering, so we’re readying for one shortly after my daughter’s, and both are taking place this weekend. Add that to the deadline run at the most recent Pathfinder book I finished and the mini-trip in the middle of the week, and I haven’t been able to get much done on other writing projects. That will change come Monday.

I did sit down and watch That Thing You Do with the family, and I liked it even more than I had the first time. What a fine little movie. And for all of us would-be 1960s rock stars, it provides just a little taste of what it might have been like to be a one-hit wonder.

I finished up Cugel’s Saga and then went straight into Rhialto the Marvelous, the fourth and final Dying Earth book. They were in an omnibus that’s been sitting on my shelf for 5 or 6 years, beside the two volumes of Jack Vance’s The Demon Princes. I’m now picking up the second volume of those, which I likewise set aside some years back after finishing volume 1. Who knew how excellent these treasures would be when I finally cracked them open? I suspected, but I didn’t know. I imagine I have some other treasures waiting to be opened on the shelves as well…