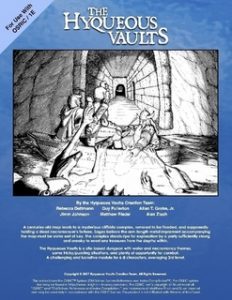 In my last entry in this four-part series, intended to be of use to fellow gamers when they pop by RPGNow in the upcoming Christmas in July sale, I’m discussing some more of my favorite game mastering tools. And I’m going to cheat.

I get a lot of my adventure advice from the review columns written by Bryce Lynch over at Ten Foot Pole. Bryce ruthlessly looks at every adventure he can lay his hands on, and mostly he finds things he doesn’t like. When he DOES enjoy an adventure, though, it’s almost always for the same reasons I like a pre-packaged adventure — cool places to visit, neat things to interact with, great characters to meet, a compelling hook, prose that’s engaging and organized, treasures beyond the ordinary, and so on. And like me, he despises the Tomb of Horrors and similarly styled player killer adventures. He also shares my love of strange faerie elements and bits from folklore.

I differ with his preferences only a little in that A.) I’m not as big a fan of mixing in weird science fiction elements into my fantasy settings, aka “gonzo” material (but Bryce always indicates whether the adventure includes those) and B.) I’ve yet to run a megadungeon that my players care for. The latter places me in the minority of game players, I guess. It seems like every other game master I meet has his players in a megadungeon.

With that preamble out of the way, allow me to point you towards the best adventures listed on Bryce Lynch’s Ten Foot Pole site. And then permit me to point you towards his “no regerts” category (yes, that’s spelled that way on purpose) where he lists the runner-up adventures, some of which I’ve found just as good as those on his best-of list. Look closely, because some of those on both lists are actually FREE. That’s right, wonderful, top-rated free adventures, like the one in the picture there. Bryce’s thumbnails don’t always indicate if they’re free, so look around. 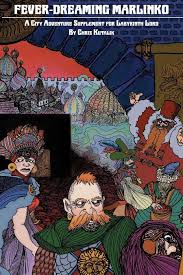 I’ll call out just a few adventures he discusses for extra emphasis. First, the material created by the Hydra Cooperative is wildly inventive, engaging and fun, and has a weird fantasy Russia flavor. Second, the new Dungeon Crawl Classics adventures are pretty much dependably excellent. If you’re running standard OSR games, they’ll require a little retooling, though. There are many, many more that I absolutely agree are wonderful, and more that he’s recommended that I’m hoping to buy and read very soon.

As far as big campaign books and hex crawls, I’ve already mentioned Sine Nomine, but I’ll mention them again because anything Kevin Crawford writes is awesome. If you’re interested in gaming any one of the settings he covers in his books, pick it up. Even if you’re not planning to run his exact setting, just one that’s similar, you’ll find a gold mine of ideas. If you want confirmation about the excellence of his work you can always try out the free version of Stars Without Number.

Some years back Goodman Games came out with two hex crawl supplements, Points of Light and Points of Light II. The first dealt with four kinds of mainland campaigns, the second with four seagoing campaigns, and each book is a pretty great start for a campaign setting, with built-in mysteries and complications.

I wrote a detailed review of Monster Island over at Black Gate a few years back, and I stand by its excellence. The booklet is intended to be used for Rune Quest, so OSR users will need to do some conversion. It’s worth it, especially if you want a fully-realized tropical setting. My earlier review is here. 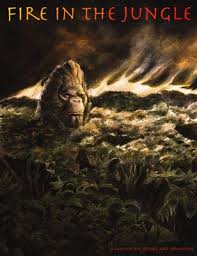 Speaking of tropical settings, check out the absolutely free, and also absolutely wonderful, Fire in the Jungle. I loved it so much I paid for a print edition of the booklet. It has an awesome map, the tomb of a monkey god, great jungle encounter tables and cool people and things to interact with, and much more.

Here’s another great tropical hex crawl, The Dark of Hot Springs Island, which deserves all of the sterling reviews it’s received. It may be the finest organized hex crawl yet written, and might well (hopefully) usher in a new model for how these things can be put together.

I’ll point you towards an earlier review I did of my three favorite James Stater hex crawls. I found that I ended up with mixed feelings about some of his other work because I’m not as much of a fan of mixing gonzo elements with straight fantasy settings. But three of them that he did for the Hex Crawl Chronicles line are among the finest role-playing supplements I’ve ever read, and one of them brings the wonderful weird and haunting otherworldly vibe without making it “gonzo” as well. I’ve been using a (somewhat modified) version of one of those three as a setting for years. If you don’t want to go back and read the details of why I liked them, here’s the buy link to the three I enjoyed most, Hex Crawl Chronicles 2, 3, and 4. 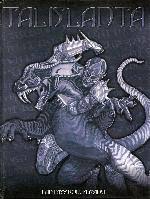 Talislanta is one of the most wonderful campaign settings every set to paper, and now the whole thing is available as a set of free downloadble PDFs. It’s like Vance crossed with Robert E. Howard, and there are multiple story hooks on nearly every page. If you’re a gamer you owe it to yourself to go look it over and see why I love the work of Steven Michael Sechi, and while I’ll never part with my hardcopies of the books even if it may be years yet before I use them again.

Sechi’s likewise the original creator of the Atlantis: The Second Age setting books, now expanded upon by like-minded souls at Khepera press. These are full-color and beautiful and still in print — and more Atlantis material is coming out every year. You ought to be reading these.

Both Astonishing Swordsmen and Sorcerers of Hyperborea and Crypts and Things have good sword-and-sorcery campaign settings built into their books, and so does the unjustly neglected Legends of Steel. Even if the settings are painted in broad strokes, their creators really understood the feel and the vibe and bring it in style. Barbarians of Lemuria is a different system, but likewise has a cool little campaign world and what is a flat-out genius story generation system for sword-and-sorcery adventures. I liked it so much I even created a little add-on for it. 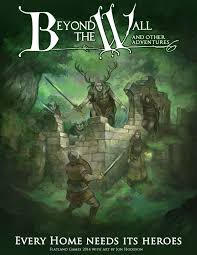 Beyond the Wall and its two expansion supplements bring the feel of YA adventures like The Chronicles of Prydain, and come complete with their slightly modified OSR system and delightful adventure generators.

Yoon Suin is a weird little southeast Asian inspired place, populated by curious monsters and written by a mad genius with immense creative gifts. I’ve yet to run it, but I won’t part with it, either, because it’s so brilliant. If you want to take your characters to some place strange and beautiful, you ought to pick this up.

I’ve said before that 50 Fathoms is one of the finest campaigns I’ve ever read. Even if you’re not a Savage Worlds reader, if you love storytelling you ought to check out this pirate themed high-seas fantasy campaign.

Lastly, I want to give an honorable mention to a product line that looks pretty darned cool, but that I haven’t yet read, Dolmenwood, by Gavin Norman. He’s the creative fellow who came up with the Vivimancer class I mentioned in a previous article, along with some really cool B/X rules and character classes. I was so taken with what he’d done with the Rogue class that I provided some initial feedback on his rules for the warrior class.

My previous posts have covered Treasure, Design, and Tableside Resources.