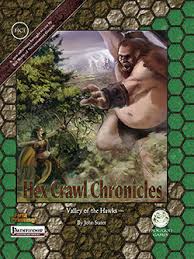 From time to time I talk about world building on this site. I think any writer has to give an awful lot of thought to world building, i.e. presenting a setting that’s not just consistent and logical but interesting.

One of the reasons role-playing game setting books appeal to me so much is that a good one just drips with ideas, and can be chock full of world building  inspiration both for writers and gamers. I’ve discussed other great settings, but I’m overdue discussing the Hex Crawl Chronicles written by John Stater.

All of the Hex Crawl Chronicles have cool stuff in them, but several are so rich with atmosphere that the adventure ideas within just about beg to be played.

(Throughout this article I’m posting links, via product images, to other fine hex crawl products.)

If you’re not familiar with a hex crawl, it’s a game setting where a vast area of land and water is overlaid with hexes, and then any number of hexes are populated with people or creatures or settlements or ruins or what have you.

Rather than being an adventure with a start and end point plotted out, a hex crawl is a setting with a whole bunch of interesting places and events and people already in place, and the player characters are free to wander in and play with it all.

At least, that’s the theory. Unfortunately, a lot of hex crawls can end up pretty dull. For instance: “Hex 1001: 3 goblins.” There are several good hex crawls out there, but truly excellent ones are hard to come by. Three of my favorites are in Stater’s Hex Crawl Classics line.

The first is The Winter Woods (Hex Crawl Chronicles 2), a wilderness region where an ancient entity plots to bury the region in ice and snow. I know, I know, you’re probably thinking that as the author of The Bones of the Old Ones I’d naturally find that of interest, but that’s just a background plot that you can use or discard as you will. It provides connective threads, however, that help set other events in motion. There are colorful characters to meet, interesting challenges and destinations, weird adversaries, and even the potentially mundane is rendered interesting by Stater’s write ups. 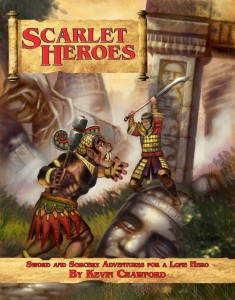 The Winter Woods is more of a “normal” fantasy setting, meaning that the area’s wide open for exploration with a few settlements and a whole lot of wilderness. But when I say “normal” I don’t mean boring, because most “normal” settings just aren’t even half as evocative or inspiring. When I read The Winter Woods, I smiled with joy and was immediately inspired.

The same can be said about my reaction to the other Hex Crawl Chronicles, particularly the next two, which I enjoyed just as much as The Winter Woods. 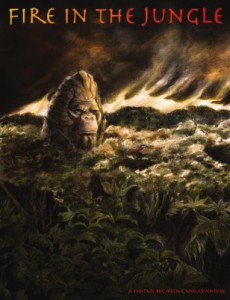 The Shattered Empire (Hex Crawl Chronicles 4) has an entirely different feel from The Winter Woods. Here is a region fragmented by war. Three major factions are vying for control of the area, and characters can wander on scene and aid any one of them, or even minor factions, or simply try to take advantage of the chaos, or do some exploring of their own in the ruins and wilderness, with all the mayhem as a backdrop and obstacle. There are any variety of ways that the characters can intervene and change the course of history. It just begs to be played. 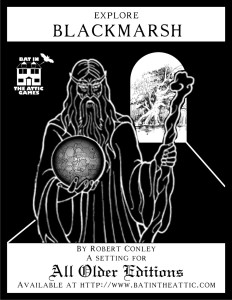 Lastly, there’s the inspiringly weird Beyond the Black River (Hex Crawl Chronicles 3), a twilight realm where petty deaths compete for the souls of men and women, where strange human cultures eke out a living, where blood-curdling creatures prowl the never-ending night and a full moon rises in place of the sun. Sometimes “weird” means full-out gonzo or nonsensical, but this is quite simply so cool I wish I’d come up with it so I could write stories there.

Go take a look. Even if you never plan on gaming them I bet you’ll find them a fun read, and they  might just inspire some story ideas of your own.

(Both Sine Nomine — here and here — and New Big Dragon Games have wonderful booklets for helping you set up your own hex crawls, not to mention some other really cool stuff. Most Sine Nomine material has wonderful hex crawl mechanics for its setting, although Red Tide and An Echo, Resounding are a good start point, and for New Big Dragon, you want both the Sandbox Companion and DM Companion.)