I returned from GenCon with a whole host of goodies I’ll slowly be working through, and I still mean to dedicate an entire post to the work of the talented Kevin Crawford. Briefly, though, I want to talk Sabatini.

You may know Sabatini from Captain Blood, or Scaramouche, or, possibly, The Sea Hawk. The odds are fair that you know those titles more through Errol Flynn movies than through prose.

I’ve had mixed luck with Rafael Sabatini. Knowing that he was a giant in the historical fiction field which, naturally, has a huge influence upon fantasy adventure stories, I first tried out his work some twenty years ago. I remember enjoying Captain Blood but bouncing off of Scaramouche because the opening didn’t grip me. 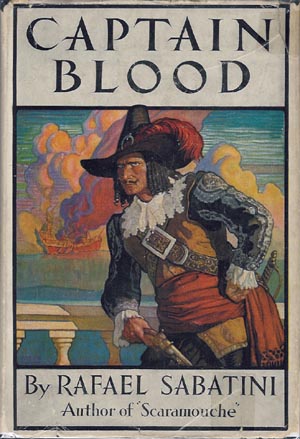 Nowadays I’m less patient for a story to start working but more patient with a story’s own intent and genre conceits. That means I’ll probably try Scaramouche again, since it’s accorded by a lot of Sabatini fans to be his best book. It’s the one that converted him from a low mid-list writer to a best-seller.

The funny thing is that while I remember the gist of Captain Blood, I don’t recall very many specific moments, so I may revisit it as well, especially after having dipped into its followups. Yes, Sabatini has two sequels, but they’re short story collections, not novels, Captain Blood Returns (aka The Chronicles of Captain Blood) and The Fortunes of Captain Blood. Apparently there’s a final Blood short story in a separate Sabatini collection, and I may have to track it down because in these shorter narratives Sabatini really shines.

The short stories occur in gaps in the novel, and every one of them I’ve read has been grand, rollicking fun. Blood outwits his enemies via his wits, relying on clever tactics, bluff, and charade. I honestly don’t recall the novel being this enjoyable. 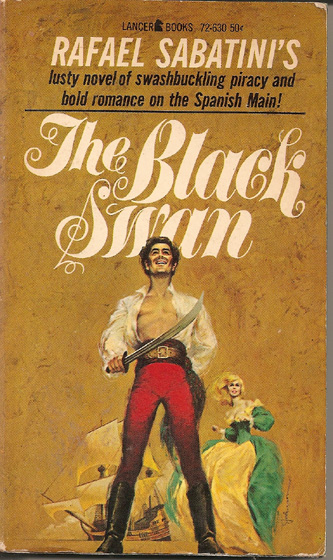 Sabatini’s style is obviously a little dated (why wouldn’t it be?) but that’s part of the charm, and these are hardly slow paced. What’s more, you can practically feel the tropic sun on your back and the gentle breezes over turquoise waves. Certainly you can hear the roar of cannons and the clink of swords. It’s also refreshing to read stories about a character with such a strong moral code.

You have to take the Blood stories on their own terms, of course. Most of Blood’s allies are lightly sketched, and, alas, I’ve yet to find any women with much agency. That was pretty typical of writing for the time — men were the doers and women were the prizes — but not all adventure writers were so blind to the possibility of women actors. Harold Lamb, for instance, writing at the same time, frequently featured shrewd women who were central to his plots.

In any case, I’ll be reading more Sabatini now. Before I try Scaramouche again I might try The Black Swan, which, according to some sources, may be his best pirate novel of all. It’s one of his later books and relatively more obscure.