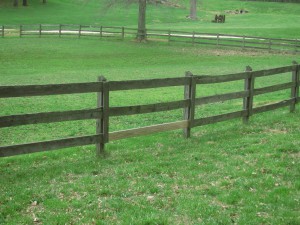 The writing day started out quite well. I rose without aid of an alarm clock and put in  a half hour of good work before I roused everyone else. Things got interesting after I returned from taking one of my children to school.

I have a three rail horse fence. One of my horses loves to press against the top rail to get the grass on the other side. When I pulled in this morning I found he had pressed against BOTH the top and middle rails and cracked them apart so that they hung down and a vast gap was there revealed (Our fence is old, and this happens occasionally, but usually only a rail at a time.) If he had cared to do so Trigger could have stopped munching at the grass and gone running wild and free. (And naked, but that’s not such a big deal if you’re a horse.)

In any case, Trigger’s adventure necessitated  a horse fence repair job that occupied my time until 12:30 or so, because after I fixed the broken boards I discovered three others that were close to going. I figured that as long as I was out there with all the tools I might as well head off future troubles

Despite all that, I got a lot of good work in once I finally made it back inside. And I must say, if I had to work on a fence in January, the weather THIS week is a far better time for it than say, last week when the temperature was frequently below zero. Today I ended up taking my jacket and hat off while I worked.

Because of my late start I’ll just briefly address the more interesting subjects I had planned to hit in greater detail. First, I finished the second Phillip Marlowe novel last night, which was fine enough that I would use a curse word if this wasn’t a PG-13 site.

Raymond Chandler’s Farewell, My Lovely was Fan Smurfing tastic. It was a thing of beauty, a work of art, an excellent adventure and mystery and social criticism and character study… Honestly, I am too tired to rhapsodize. It is so finely crafted that if I were the jealous type I could weep to think I could ever craft something that approaches such excellence. I look forward to reading more Chandler, although Max Allan Collins commented the other day that Farewell, My Lovely is the greatest of the Marlowe books. I will soon enough discover whether or not I agree.

Note my clever segue to Collins, whom I mention because three more of his Quarry books showed up in my post just today, a gift to myself. That leaves me in possession of all the earlier Quarry books but his short story collection. Now that I’ve heard that his Nate Heller series has a little bit of a Marlowe feel, I’m even more interested in seeing what it’s about, but I have some more Marlowe and Quarry to read before I get there.