ARCs are Here! The New Book is REAL! 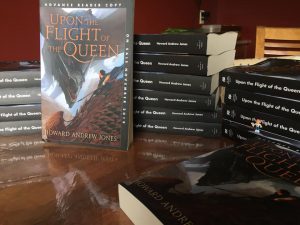 Yes indeed, here’s a shot of the ARCs that arrived for Upon the Flight of the Queen. If you’re a reviewer, I hope you’ll contact me here or drop me a line via e-mail or FB or Twitter, because I’ve got a bevy of copies of the newest book. This is, in fact, book 2 of the Ring-Sworn trilogy, the first of which, For the Killing of Kings, appeared in April. This is slated for November!

If you don’t see me here much that’s because I’m working hard on book 3, on some short stories, and on editing Tales From the Magician’s Skull, the third issue of which is back from the printer and should be headed your way shortly — providing you were wise enough to subscribe!