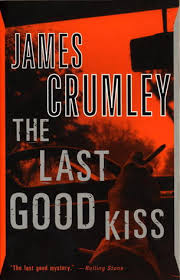 Chris: Back when I worked in a bookstore James Crumley was hard to shelve. The author’s first book, One to Count Cadence, came out in 1969 and was a critically acclaimed novel about US servicemen in Vietnam and the Philippines. At that time it was a Vintage Contemporary paperback and shared that influential line of modern fiction’s packaging and cover design with, for example, Jay McInerney’s Bright Lights, Big City and Cormac McCarthy’s Suttree. Had to shelve those, and One to Count Cadence, in Fiction, but Crumley’s other work, The Wrong Case, The Last Good Kiss and others, were pretty clearly Mystery. 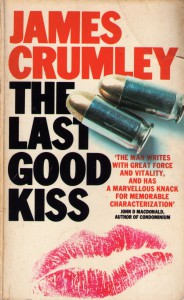 In a big bookstore you have to try to shelve books where a customer will think to look for them, so we split Crumley’s work between Fiction and Mystery, having copies in both places whenever we had enough books.

These days The Last Good Kiss is packaged as nothing but a mystery, and it fits the genre as well as a you could ask. It has the classic hardboiled sense of characters trying to find the truth, trying to determine the right thing to do and then do it, but this is made even more challenging than usual by a fog of Vietnam era disillusion and a desperate dependence on alcohol.

Howard: It’s appropriate you should mention alcohol, because I think it turns up more here than in any other book on the list except Latimer’s The Lady in the Morgue (or in some Hammet, who may not have been aware that liquor’s prevalence had a statement). Most of Crumley’s characters are constantly drinking, are preparing a drink, or on their way to get a drink. Their dependance upon alcohol is just one of the most obvious symptoms of their underlying issues.

I’ve been wondering what I’d say about this one for a long time. It’s hauntingly beautiful. It’s darkly tragic, seeded with moments of comedy. I’m not sure I’m yet willing to call it a masterpiece — if it lingers in my memory (in a good way — not in a “Batman Forever was so bad I can never erase certain moments” way) over the next few years perhaps then I will go that far.

That said, I do not feel compelled to re-read the book, as I do with key works of both Chandler and Richard Stark. I’m not entirely sure why except that its darkness is deeply affecting, and knowing now how the mystery all comes out it would be all the more painful than experiencing it as the story unfolded. Maybe I’m still too much of a softie for real noir.

Chris: I was going to suggest that Crumley’s fine prose combine with his often intoxicated characters to create a sense of Raymond Chandler filtered through Hunter Thompson, but poking around on the web I see that combination has been used to describe Crumley’s work more than once. I don’t want to make too much of that rather flip assessment, but there is something to it. Here is beautifully polished, melancholy prose depicting the world as seen by characters intent on distorting their apprehension of it, with little thought of their health, their future, or any of the many problems such a lifestyle engenders. 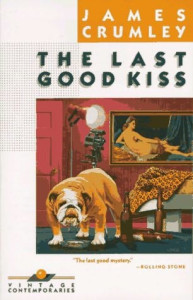 C.W. Sughrue, the hard-drinking thirty-something vet narrator of The Last Good Kiss, takes a job chasing an author on a prolonged binge and finds himself hired to find a girl missing for ten years. This seemingly impossible task grows steadily more alluring the longer Sughrue works at it. The more he learns about her, and the almost pathological effect she’s had on most everyone she spent time with, the more he wants to know, until he is as obsessed with his version of her memory as those he finds who actually knew her.

It is in the creation of this lost woman and those who remember her that The Last Good Kiss reaches greatness. Lost individuals, lost love and haunted pasts are common in hardboiled fiction, but these elements attain a strange depth and luster here. Betty Sue Flowers, gone missing in ’60s Haight-Ashbury a decade past, can be seen as something of a human mirror. Everyone Sughrue meets wanted her love, but also something more that differs from person to person. Those who come to know her are drawn by her beauty, her skill, her strange charisma, and in her they seem to see what they want most, their best potential fulfilled. When she is gone she leaves behind a sense of dreams betrayed. This is not her fault, and a terrible burden to bear.

Howard: That’s beautifully said. I don’t know that I can add much to that, Chris, except that part of the tragedy is that no one really knows Betty Sue for who she really is, even if they think they do.

Chris: There are several passages in The Last Good Kiss good enough that you might get that rare urge to read them aloud to a friend, even if you have to call that friend long distance to do it. Although very much a novel of detection, with clues, a mystery, and a final harrowing twist, the book is more concerned with character, and its failure, than anything else. It’s a strange, beautiful, and quite uncomfortable novel.