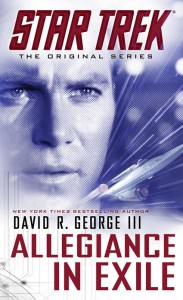 It’s not as though I have a whole lot of free time. And it’s not as though I don’t already have enough projects. For instance, I’m working on a new trilogy and I intend on having at least one and a half written before book one goes to press. I’m brainstorming some new Paizo Pathfinder books as well, and at some point I’m likely to be working on both series at the same time.

Yet after that extended look at the original Star Trek the other week I had a doh! moment and wondered why I’ve never considered writing a Star Trek novel.

I suppose I should rephrase… since becoming a professional writer, why have I never considered writing a Star Trek novel? I used to write Star Trek fiction all the time and I know the original series like the back of my hand. If I could talk to the series editors (a little simpler now that I have a proven track record) I bet writing Star Trek could be a lot of fun and earn me some money.

But I’m completely out of touch with modern Star Trek books. I haven’t read one in thirty years, and until I went to the bookstore last week I wasn’t even sure that A. they were still being written and B. that there were still books about the original series (and not the reboot original series). Turns out it was a yes to both questions.

So now, before I seriously contemplate approaching series editors, I want to get a feel for the kind of Star Trek books that are being publishing right now. 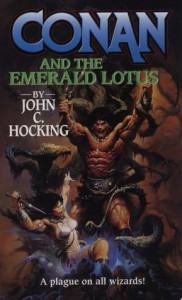 Just so you know, I may never got any further with this idea than kicking it around (see the aforementioned “how busy I am” comments at the top of this post). I might go no further than simply reading a little Star Trek, which isn’t going to hurt me unless it’s really bad. I picked up Allegiance in Exile by David R. George III. Do any of my visitors have any opinions on it? Is the book representative of the new Star Trek novels? Of the recent ones about the original series, which are most typical? Which are best?

I’m reminded of my request some years back for which were the best Conan pastiche novels. Some proved much, much better than others, and most weren’t worth reading at all. I suspect it’s the same with the Star Trek books, but I hope I’m wrong. I know there were a lot of iffy ones back when I was reading them in the ’80s. As with Conan pastiche I’ve discovered no real master list of good and bad Star Trek pastiche, unless you count Amazon or Goodreads rankings, which are far too arbitrary. I’d prefer some kind of site run by a trustworthy reviewer. Anyway, I’d be grateful of you’d share your opinion on this, or point me towards a site that does. Enquiring minds want to know.