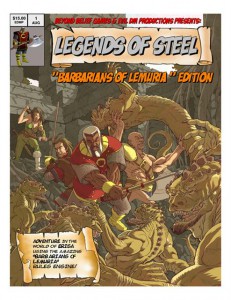 Even though I have a vast assortment of old role-playing modules staring down at me from my bookshelves, and even though it’s been a few years since I played, I’m still tempted sometimes to buy more. I can’t help it — I’ve been a gamer since junior high. Ever since I was 12 or so I don’t think I’ve gone more than 2 years at any stretch without playing (or, usually, running) an adventure or campaign, and one of the things I love most is reading through adventure supplements. It’s the storyteller in me, I suppose.

Right now I’m tempted by a pretty nifty setting on Kickstarter titled Primeval Thule. If you’re a sword-and-sorcery fan you should really go take a look. It sounds cool enough that it might be a good read even if you’re not interested in playing a game. As of the moment I’m typing this note, there’s only about 50 hours to pledge money to the project, so I thought I’d  help spread the word.

Last year I was tempted by a game titled Astonishing Swordsmen and Sorcerers of Hyperborea for pretty much the same reason. It’s clearly designed by sword-and-sorcery fans and the setting sounds like it would be a blast to read. So far I’ve resisted the impulse, but sooner or later I may crack and pick it up. I would probably already have done so if I was actually running a game these days.

Any of you gamers have a recommendation for the best sword-and-sorcery style setting you’ve read? This one looks great, but so far as I can tell it’s never been released! Blade of the Iron Throne is excellent — I managed to read a sort of “sneak peek” edition. My old friend Frazer Ronald created Sword Noir, but I’ve been so slammed I haven’t yet managed a good look at it!

I think my two favorite sword-and-sorcery settings are the one found in Barbarians of Lemuria and Legends of Steel, both of which I liked well enough to purchase in dead-tree format. I noted as I was creating the product links for this essay that a reviewer complained that there was no difference between the two and that the system was basically the same. Well, yes, the system is almost the same, but the world and the adventures are different, and they’re both glorious old school fun. I suppose that some people are more interested in the numbers than the system, but I just don’t get that. More than half the fun is reading about all the inspiring locations just dripping with the promise of adventure…