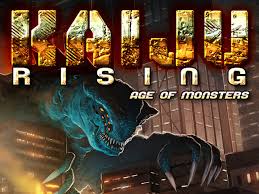 Shh. So I’m not supposed to tell you this, but I’m one of the authors who will be unlocked if funding is met and exceeded in a new Kickstarter. There’s at least three of us mysterious contributors (I won’t tell you the identity of the others) who will be revealed if Kaiju Rising meets its stretch goals.

As it’s an anthology for monster stories, you can darned well bet that I’m drafting a new Dabir and Asim story for the collection. I’m pretty busy with other stories right now, but it was such a great looking assembly that I couldn’t stand to pass up the opportunity.

The first stretch goal will include additional internal art from Robert Elrod and Chuck Lukacs, and the next three stretch goals are authors. I’m not sure which of those three I am, but I’m hoping you’ll join in the Kickstarter and unlock my story. The full details can be found here.