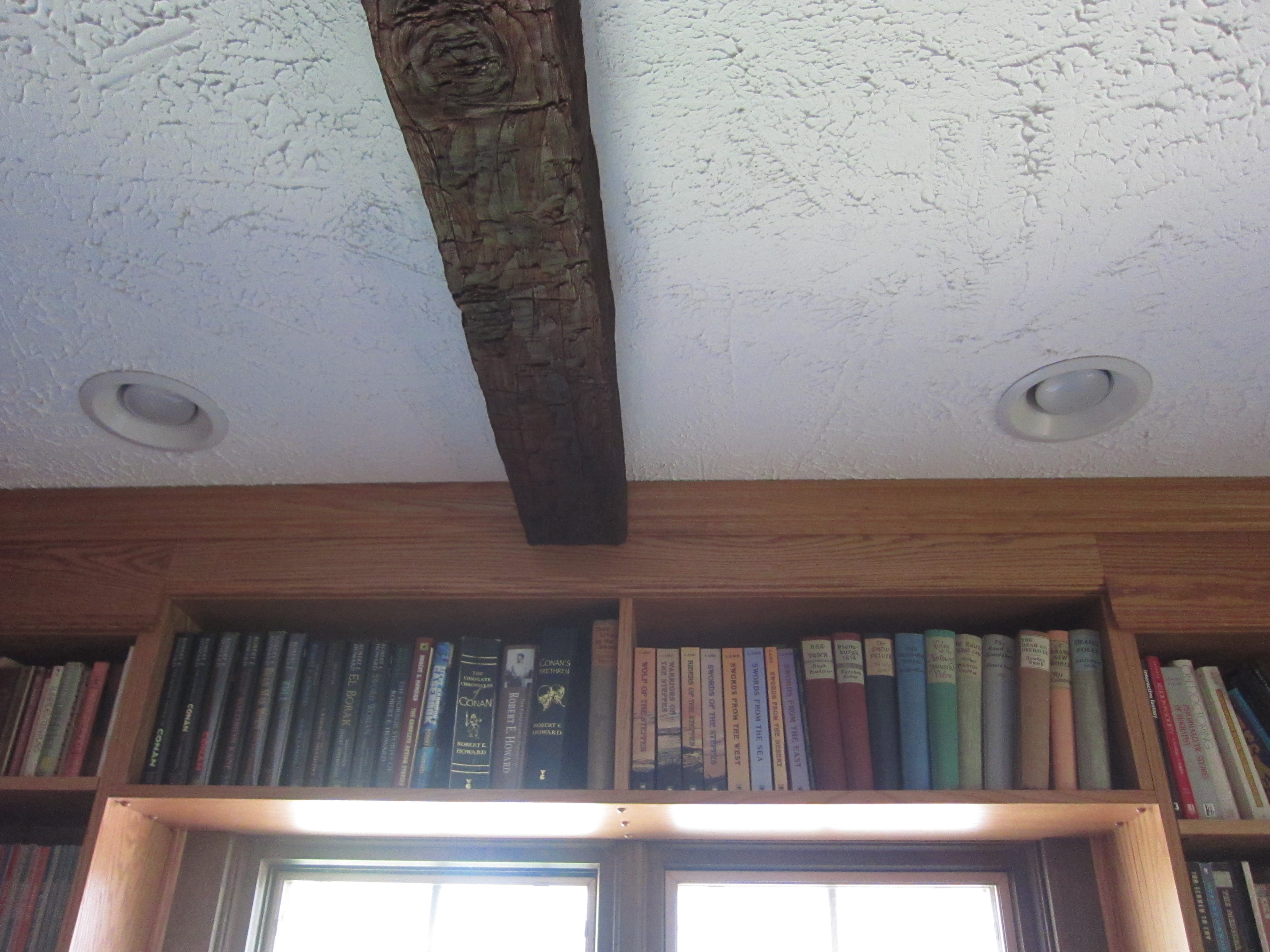 The Lamb, REH, and pulp collections on the north wall.

As I was re-organizing the study this weekend I got to thinking about a conversation I’d had with John Hocking a few months back. The years keep speeding along, and we’re both wondering how much longer we’ve got to truly enjoy the books on our shelves. Hocking started a “bucket list” of books he’s been meaning to read. I should say that he’s not only started the list, but that he’s started reading from it.

I’ve done a little of the same. Neither of us is trying to throw ourselves at classics we’re not interested in, but at books that we have on the shelves and for some reason have never gotten around to checking out. I’m 45, after all, and I don’t feel any guilt about not having read War and Peace or Finnegan’s Wake. Not anymore. If I’m reading for amusement and/or edification, I’m not going to slog through something that feels more like work than pleasure. 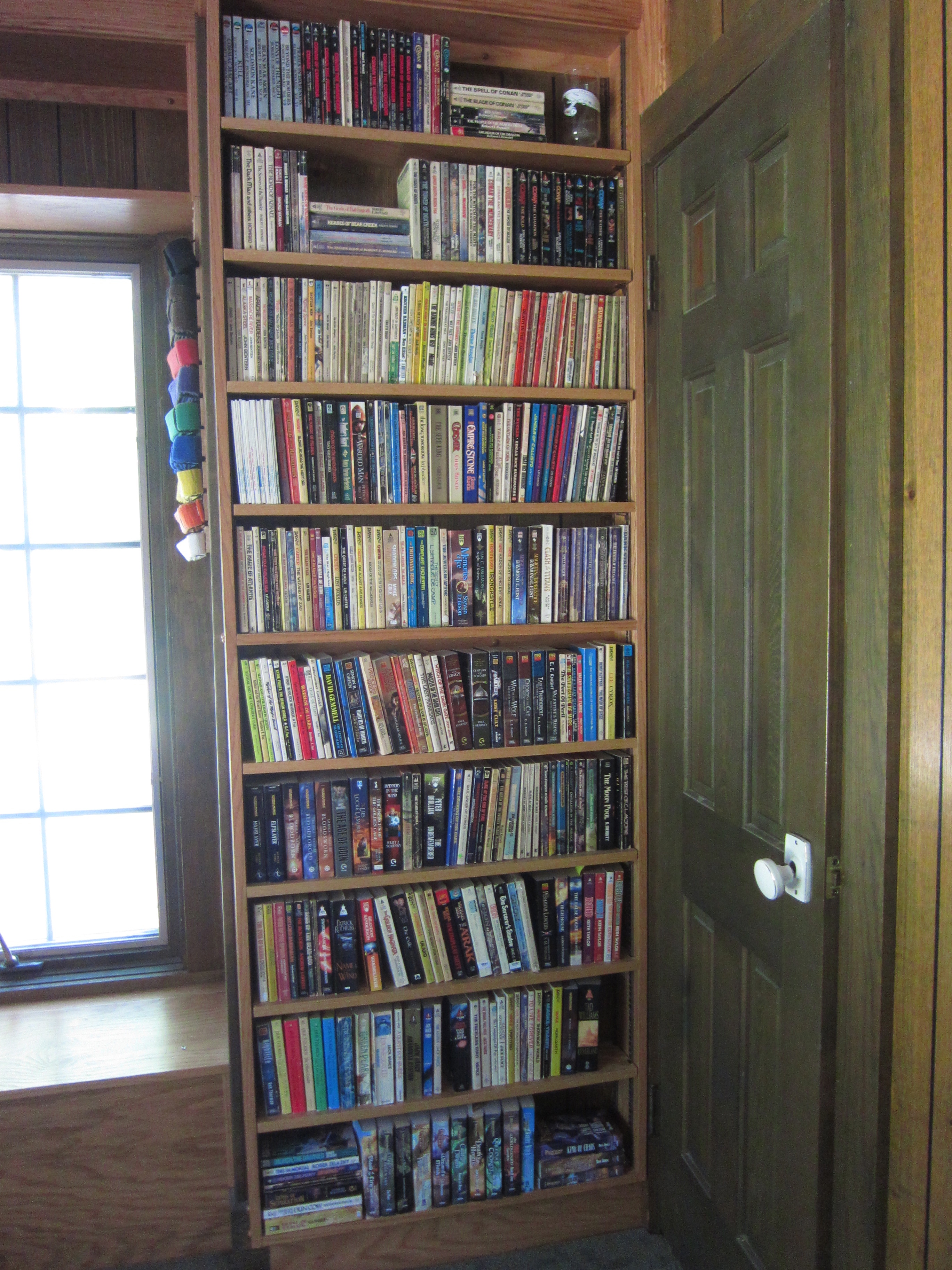 Click to enlarge. Half of my paperbacks, just east of my desk.

So what’s on my TBR pile? A mixture of work by friends and colleagues, the obscure, some pastiche, some questionable adventure fiction, some classics — both in and outside the genre — fiction in other genres, and newer work. For instance, in the friends category, I’m looking forward to reading E.E. Knight’s newest Vampire Earth novel, Appalaichan Overthrow, which is still sitting untouched on my shelf. I haven’t yet read Dave Gross’s latest, or a number of the more recent Pathfinder novels, and I’m particularly curious about both Chris Jackson’s Pirate’s Honor and Richard Lee Byers’ Called to Darkness because I hung out with both authors at GenCon 2013 and they’re pretty cool. Nathan Long’s first Ulrika book impressed the heck out of me, and I have the next two books, but I haven’t opened them. I want to read more of  Elizabeth Bear. I could go on. 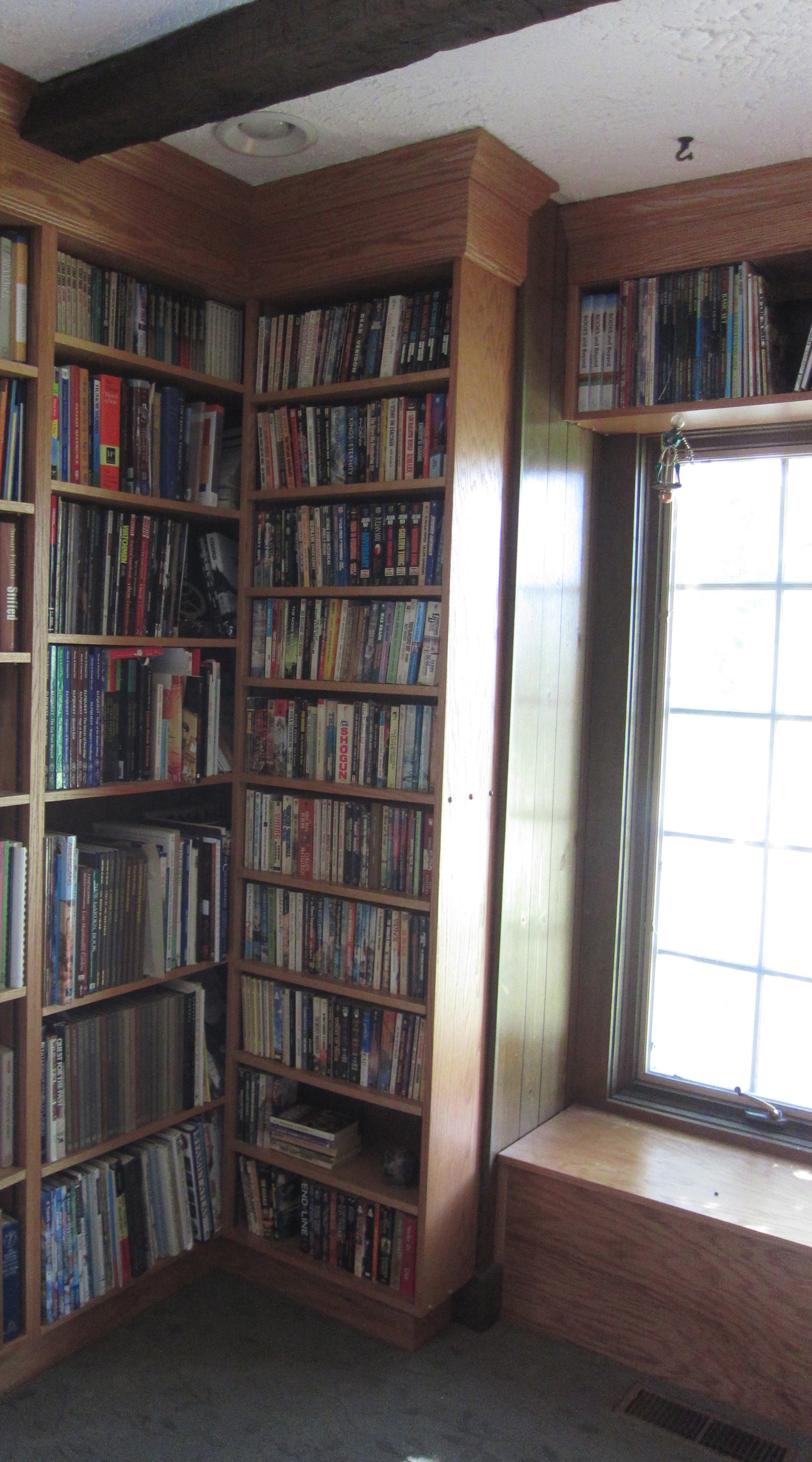 The obscure, well, Keith Taylor’s Bard books from the ’80s are really good and unfortunately all but forgotten. I have three more books to go (and a fifth to track down). I have a handful of Ki-Gor novellas left. It still seems incredible to me that I could enjoy jungle-man adventures so much, but the ones that are good are outrageous fun. And pastiche, well, I’ve got a few more John Maddox Roberts Conan novels to read, and the Andrew Offut Keith/Taylor Cormac Mac Art books, which are supposed to be great fun, and Karl Edward Wagner’s Legions from the Shadows, which is allegedly excellent.

Among those books that might indicate that my taste is questionable are some of Gardner Fox’s novellas. I’ve got all the collections, but I can’t take too many in a row. They’re eye-rollingly ridiculous but unpretentious, full of cool gonzo moments and ridiculous bits in equal measure. I have one or two other Lin Carter books that I’ll probably read that will fall into the same vein.

Classics in the genre, well, I have a number of the Ballantine Adult Fantasies that I’ve never read. I am almost ashamed to admit that I’ve never gotten very far into Vathek, or Khaled. And as someone who admittedly loves Lord Dunsany, it pains me to admit I’ve never read his three most famous fantasy novels, Don Rodriguez, The Charwoman’s Shadow, and the King of Elfland’s Daughter, no matter that they have been on my shelf for at least twenty years. There are more than this besides.

Classics outside, well, I thought I might try Pride and Prejudice, mostly because I enjoyed Mary Robinette Kowal’s Jane Austenesque fantasy novels and I’m told by many, including my good friend Eric Knight, that Austen writes fantastic dialogue. And as much as my father loved Moby Dick I thought I’d give it one last try, in his memory.

Outside fantasy and science fiction but still in the genre ghetto are a number of historicals and thrillers. Poul Anderson’s Viking trilogy about Harald Hardrada is supposed to be pretty good, as are a few of his standalone historicals (I’ve read and enjoyed two of them) and I hear that L. Sprague de Camp’s historicals are pretty tasty as well. I read a big swath of the Parker novels by Donald Westlake (writing as Richard Stark) but I haven’t read them all, or a related series, or, indeed, some other books by him. What a great writer. I have a handful of books from Ben Haas that I haven’t read, mostly westerns. I never knew I loved westerns until Hocking introduced me to the fiction written by Haas, usually under pen names. Then there’s the shelf of pulp fiction both preserved by collectors and reprinted by outfits like Black Dog Books and Vintage Crime/Black Lizard. 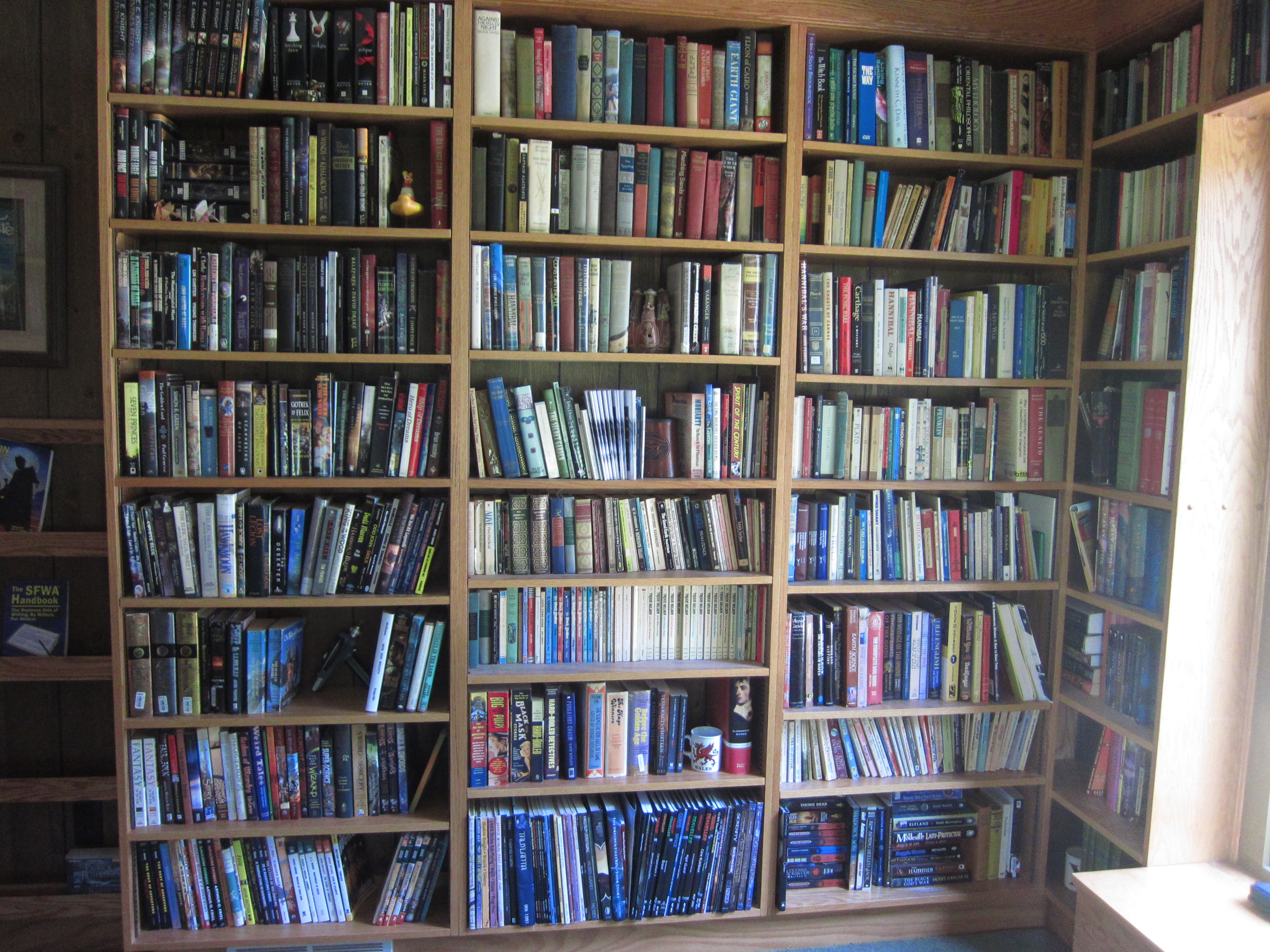 Hardbacks on my west wall.

Lastly, there’s recent stuff, like work by Brent Weeks, or PYR authors like Jon Sprunk, or George Mann. There’s just a LOT on my shelves.

I hope to live many more healthy years for many reasons, most important of which is to be here for my family. …And to read all of this cool stuff I’ve accumulated!

Hey, which of you out there has my copy of Scott Oden’s Men of Bronze? I know I loaned it out, but I can’t remember to whom. And where are the rest of my James Enge novels? Read ’em, and bring them back!