The Lion of Lucca 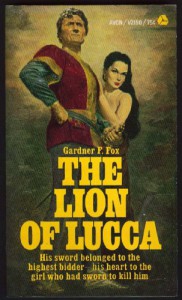 I just finished the second Gardner Fox historical novel after loving The Borgia Blade. This one, The Lion of Lucca, didn’t thrill me nearly as much. Any time that there were tactics or battle scenes, it was great stuff. The rest of the time I was reading a romance novel from a guy’s perceptive, which meant that there wasn’t much about what anyone was feeling, just a whole lot of admittedly well-written descriptions of lovely renaissance women getting it on with the protagonist. 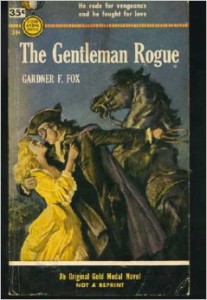 It was just a little odd. There were some racy scenes in The Borgia Blade, but they meshed much more smoothly with the plot, and I cared more when they happened because I cared more about the characters.

Anyway, as a result, I’m less enthusiastic about exploring the rest of Gardner Fox’s historical novels, although I’ll probably give him another go eventually. I mentioned how pleased I was with The Borgia Blade the other day and Chris Hocking pointed out that it had first been published by Gold Medal, then waxed eloquent about the excellence of their editorial team, and how he’d never actually read a bad Gold Medal book. Some were just fair, sure, but he said most in his experience were good to excellent. Perhaps that famed editorial team brought out the best in Fox’s first book.

I’ve just now performed a cursory search and found that there are, indeed, several more Gold Medal books by Fox. Maybe I’ll try those if I can land them for decent prices. My birthday’s coming up next month, after all.