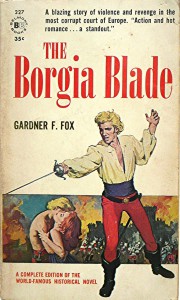 I know of Gardner Fox mostly through his comic creations (like, say Hawkman or the Justice Society of America) and the sword-and-sorcery adventures of Kothar. The Kothar stories are mild entertainment. They alternate moments of splendid action and inventiveness with head-slapping stupidity and nonsense. I once resolved to finally read through the entire series — they’re short books, after all — and mid way through the second book remembered why I hadn’t gotten any further.

But Morgan Holmes knows his heroic fiction, and when he told me there were some good Gardner Fox historicals, I believed him implicitly, and snapped up the three he said were the best. One of these, The Borgia Blade, I took with me to read on a  long plane flight recently, and the competence of the writing and the depth of the characters surpassed anything that I’d expected from the creator of Kothar. 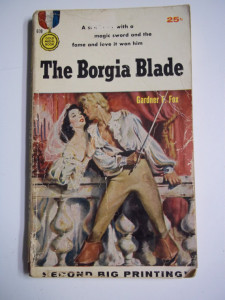 I’m better read on Renaissance Italy than your average man, but I’m no expert. Fox clearly was — he breathed so much life into every moment I thought I was in Italy myself. And he sure seemed to know sword fighting, and human nature, not to mention how to lay down a cracking good tale. Sure, it’s not a MODERN tale, but it’s a grand old fashioned historical adventure with a lot more verve and gusto than far more famous ’50s historicals. As I think I’ve mentioned, someone unfamiliar with ’50s historical adventure novels might think they’ve stumbled upon a treasure trove when they chance upon their back cover copies, but most are rather slow and labored. There are some gems, and I heartily declare that The Borgia Blade is one of them.

It’s long out of print, of course, but it’s not too expensive to lay hands on a copy if you want to look for it through addall.com or some other used book search service. Highly recommended for those readers who love an action adventure with swashbuckling sword-play, intrigue, lovely women, and Leonardo DaVinci.