The Best of Jungle Stories 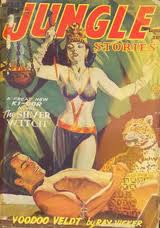 Over at Black Gate today I waxed on about the peculiar glories of the adventures of Ki-Gor in old Jungle Stories magazine. My friend Charles Rutledge was posting about them a few months ago over at his web site, Singular Points. My main article on Ki-Gor and why he’s worth reading can be found at Black Gate. Here, though, is my list of the best of the run, in no particular order. See for yourself just how many lost civilization, priestesses, and beasts make an appearance!

In the Black Gate article I neglected to mention just how much fun even a list of Ki-Gor titles was, but then there’s also the delicious purple of the blurbs that introduce each story. Here are a couple of samples. First, from “The Monkey Men of Loba-Gola:”

Ki-Gor, White Lord of the Jungle, tracked a treachery spoor to the Forest of Treasure, challenging lovely, mad Zoanna and her evil Master. But a devil’s trap was waiting. Ki-Gor faced a battle no man might win… against Nihilla Ati, the Invisible Vampire of Death!

And how about this one, from “The Golden Claws of Raa:”

Sam Slater, cobra-eyed merchant of warrior-flesh; Mog, the gorilla with human blood on his dagger-like teeth– and Raa, white queen of the ape legions… these were Ki-Gor’s enemies in a battle that only the voodoo of Fate could decide!

The Silver Witch
The Beast-Gods of Atlantis
The Sword of Sheba
Lost Priestess of the Nile
The Monkey-Men of Loba-Gola
Huntress of the Hell-Pack
The Monsters of Voodoo Isle (not to be confused with another story, Monster of Voodoo Isle, which is NOT good)
The Golden Claws of Raa
Slave Brides for the Dawn-Men
Tigress of T’Wanbi
Blood Priestess of Vig N’Ga
Flame Priestess of Carthage
Warrior-Queen of Attila’s Lost Legion
Death Seeks for Congo Treasure
Stalkers of the Dawn-World
White Cannibal
Eyrie of the Golden Goddess
The Golden Beast of Zuli Maen