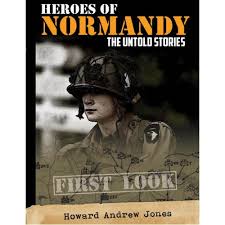 Last year I mentioned I was working on two secret projects. One of them turned out to be Tales From the Magician’s Skull, but I haven’t revealed project two… until now.

I was the lead writer on Lock ‘n Load Tactical’s Heroes of Normandy: The Untold Stories, Volume 1. I wrote three of the tales in the collection and edited the others, along with some serious help from technical editor Hans Korting. It’s not QUITE available for release yet, but you can listen to an audio of the first few minutes of the first tale in the collection, “The Stovepipe Bluff,” written by yours truly, by going here.

The stories in the collection are all fiction, though they’re based around actual events in WWII, and they feature characters depicted upon counters in the Lock ‘n Load Tactical game series.

I’ll have further updates as the book gets closer to release. Here’s a link to the future ordering page…