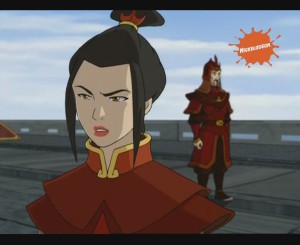 Part of the reason she succeeds so beautifully, of course, comes from the amazing voice work of Grey Delisle, whose delivery is always bone-chillingly perfect. According to some sources, at least one of her speeches was intended simply as a screen test, but was so well-done that the show creators worked it into an episode anyway.

But of course Delisle couldn’t perform her work so beautifully if the scripting didn’t give her the words. Azula doesn’t actually appear in the episodes as a character until near the very end of the first season, although she’s mentioned by her brother Zuko earlier and, if you’re paying attention, she’s the fire bender shown in the opening credit sequence from the very first episode — a clue that the show’s creators were really planning ahead.

She’s a supremely gifted firebender and tactician, and so self-possessed that she’s both frightening and inspiring. Here’s a quick look at her from the first episode where she plays a major part. She’s ruthless AND funny, and consistently scripted that way. She’s toyed with poor Prince Zuko his entire life, as we learn from occasional flashback scenes. I LOVE a casual exchange later in the same episode I’ve pulled this clip from. She’s tricked her brother Zuko into becoming her prisoner. Irate, the prince shouts: “you lied to me!” Delisle’s delivery is priceless; it’s perfectly, casually, contemptuously dismissive: “Like I’ve never done that before.”

There’s an entire reddit thread devoted to great Azula lines that is a little too focused on her final breakdown, but it’s worth a look.

I could go on and on about how wonderfully warped Azula is — for instance, she’s so competitive that even a “relaxing” game of beach volleyball she approaches the way Hannibal probably studied the ground at Lake Trasimine.

Avatar: The Last Airbender is so much more than it seems to be on watching the opening episodes. On first glance it may appear to be an episodic kid’s show where one evil character will constantly chase the good characters from place to place. Don’t be deceived. The storytellers build on the premise and deliver something truly astounding. The only other anime I’ve seen that’s even remotely in its same class is Full Metal Alchemist: Brotherhood.

I can recommend The Last Airbender as both as a source for viewing pleasure and as an inspiration for fellow storytellers. If you haven’t watched it yet, get to it, and if you’re skeptical after the first few episodes, give it time. You can place your trust in these storytellers — they will come through for you.