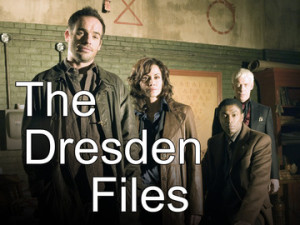 My wife and I are big fans of the Harry Dresden books — although I’m two books behind at this point — and are noodling around with the idea of playing the Dresden game with the kids.

We’re a little concerned that some of the book content might be a bit much for our 13 yo, so we got the series off Netflix.

I recall seeing an episode or two of the series when it was airing and kind of enjoying it, but we’d never seen most of these, and I had no idea how good the writing and acting was. Sure, some of the differences are jarring — especially Bob — but by the middle point of the very short one-and-only season I was pretty impressed.

I was really sold on all the characters and their world. All of them were a little different than how I’d pictured them from the books, but I loved the portrayals of all the leads: Paul Blackthorne as Harry, Valerie Cruz as Murphy, Conrad Coates as Morgan, and, most surprising of all because his role was the most different from the books, Terrence Mann as Bob. Heck, I think I might actually have liked this version of Bob better than Bob in the books, which is probably heresy of some kind.

I wonder if it just came too early? Now we have a whole spate of supernatural shows on television… but I have to say that of them all, I believe I’ve enjoyed The Dresden Files the best. It surely worked on the kids. Of course now my daughter wants to read the books even more… and will still have to wait a couple years…