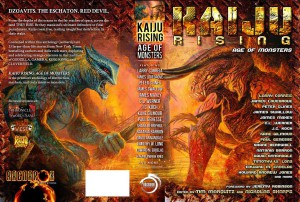 The anthology Kaiju Rising is now available as an e-book (for $4.99), with physical copies to be made available soon. It’s chock full of stories about giant monsters drafted by some talented writers, many of whom are my friends. But even if you’re not typically interested in giant monsters, this anthology features the newest Dabir and Asim story, “The Serpent’s Heart.” I hope you’ll try it out, and spread the word!

Here on the home front I’m putting the finishing touches on the rough draft of part IV of my big fantasy book, the one I’ve been referring to as the Hearthstones novel, although I’ve got a better title picked out. With a little luck I should have the final scene of part IV fleshed out today and then I’ll give it a polish.

I’ve continued to write this book in a different way than I’ve written any before it, but then it’s a different sort of book, and far longer, than anything else I’ve ever written. It may turn out to be 160 thousand words by the time I’m through.

I’ve never written a book out of order like this before, but of the 7 parts, 1 and 7 were the first that were completely drafted. Then came part 2 and 3, then part 5, and now part 4. Part 6 is the only one that still mostly has just the framework in place. It reads  sort of like the summary of a stage play, although some of the scenes are already scripted. It’s the shortest section, apart from part 7, and I think I should be able to finish it up and polish the whole thing while I’m working on my next two Pathfinder novels.