Swords in the Mist and The Coming of Conan 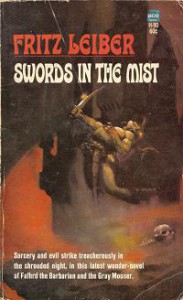 With our completion of  Swords in the Mist last week, Bill Ward and I started exchanging final thoughts and ended up mostly just looking ahead for next week’s read from The Coming of Conan.

When we finished Swords Against Death if felt like we had a lot more to talk about, perhaps because there were so many more stories, or perhaps because there was a whole scale of good to great (or occasional average). In Swords In the Mist we had three levels of quality. There were the three excellent short stories (“The Cloud of Hate,” “Lean Times in Lankhmar,” “When The Sea Kings Away,”) and some entertaining linking bits that weren’t quite stories and weren’t entirely satisfying but still had some nice moments. And then there was the unlamented and never-to-be-read by Bill and Howard again “Adept’s Gambit.” 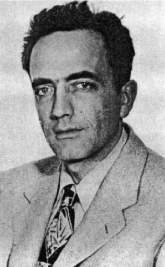 Bill: Agreed. I’m not sure what we could say that hasn’t already been said: Leiber at his best is sublime and the Fafhrd and Gray Mouser catalog contains many tales from various points in his career, with some shoehorning to get them into “saga shape,” which sometimes results in things like stories written twenty years apart rubbing shoulders with one another. That can be confusing, in a whole lot of ways.

Which makes me think how much I’d love to see these tales get the same treatment as Del Rey gave Conan and many more of REH’s best known tales.

Howard: It wasn’t so long ago a collection like The Coming of Conan would have been impossible. It’s not that there weren’t Conan books, but, well, there weren’t any Conan books by Robert E. Howard that were in print. Due to some publishing machinations I don’t feel like getting into here, any Conan stories by Robert E. Howard were hard to find for decades, and even if you could find them in used book stores they’d been heavily edited, revised, and packaged with pastiche (stories written by other writers). There were occasional attempts to get us the real thing, among them Karl Edward Wagner’s three edited volumes, but none of those collections ever had the chance to be completed. 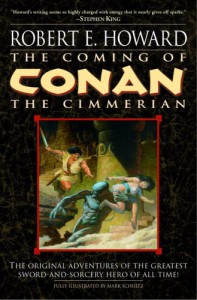 Bill: Exactly. Correct me if I’m wrong, but it wasn’t until these Del Reys came out around ten years ago that we finally (!) got the original, unexpurgated REH Conan. That is a long time for an extremely popular character (one who has eclipsed his creator) to not have his adventures properly chronicled. As you say, the machinations are too long for this post (and are better detailed in many other places), but the whole thing, at its worst, seems to me like a gross parasitism off the legacy of a true original and pioneer. And I actually like some of the de Camp stories; I just don’t think they ever needed to be written as Conan stories — a guy named Robert E. Howard already did it better than anyone ever could.

Bill: And then I think of REH not even getting paid for some of his Conan sales to Weird Tales, contrasted with all of the baroque licensing and trademark laws that exist now to ensure that Conan, a multimedia property far more familiar to people through films and games and comic books than the original stories, is worth millions to his corporate masters, and it makes me want to start crushing skulls with an Underwood. Exhibit A: the execrable recent Conan film. Conan himself wouldn’t be bothered to be angry about this 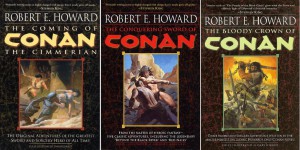 , of course, he had a very unsentimental view of the world.

The Del Rey’s are truly beautiful though, the royal treatment, and about damn time, too. We have stories that are as close to the originals as we can get, in the probable order they were written, complete with some fragments that are themselves interesting. Great art and supporting materials, and a real feeling that, finally (!!!) we are getting a proper honoring of the legacy of one of the most important writers of the twentieth century. Only took sixty years or so. 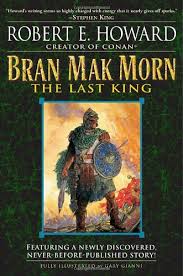 Howard: Very nicely said. I do sometimes wonder whether it was really necessary to include all of the appendices with rough and unpublished drafts, especially in some of the volumes with lesser-known characters, because I’m not sure that a lot of them are going to be of interest to anyone apart from scholars. Some years back Leo Grin had an interesting essay suggesting that some of the contents might have been combined, for instance Bran Mak Morn and King Kull in one volume, and all the leftovers saved for inclusion elsewhere.

And as fabulous as it is to finally have the unexpurgated text, I’ve been wondering HOW unexpurgated they are. Are ALL the texts restored to be just as Robert E. Howard wrote them originally? I’ve never been clear on that, and I wonder sometimes if we’re getting the “best” edition of REH possible if it’s him completely unedited. Surely he might have thought some suggestions or changes to his prose were good. 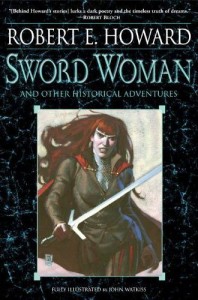 Bill: It may become clearer when we read the supporting material in The Coming of Conan, but my impression was that the normal edits that occurred in his lifetime to give us the published stories as they originally appeared are essentially retained, aside from maybe going back to a peculiarity of spelling or usage that REH preferred. It’s the alterations that occurred in the pastiche era (particularly to unpublished stories) that are rectified.

Howard: It’s probably there in the fine print and I’ve just never read it. Which I’m a little embarrassed about, actually, seeing as how I’ve contributed an essay to one of the Del Reys and am friends with many of the Robert E. Howard scholars. As to what lies ahead of us — it’s a mighty compilation of short stories. A few of them were never published in Howard’s lifetime. In general, when Farnsworth Wright rejected a Conan story it was because it wasn’t as strong. He didn’t have perfect ears, though. For example, he rejected a very strong King Kull story, “By This Axe I Rule” until it was repackaged with more purple prose and more sorcery into the first published Conan tale.

First up, though, before we even tackle the stories, we’re reading an essay Robert E. Howard wrote about the Hyborian Age. Likely he never intended it for anyone else’s eyes but his own — a background document so he could keep his world building straight. If you’re new to Conan you may want to hold off and start reading with us when we tackle the short stories, because this essay’s not truly indicative of the kind of spell Robert E. Howard’s prose can weave. It’s in the back of The Coming of Conan and can be found in most other “complete” Conan collections under the title of “The Hyborian Age” (and even in the first two volumes of the old de Camp/Carter Ace collections — although de Camp likely rewrote even that).

If you are new to Robert E. Howard, try not to bring the modern world with you when you’re reading his work. I try to remind first comers to REH that these tales were composed in a different time, by a rather young man, for a very specific market.

Bill: And if they got a problem with that, best duck when I start swinging the typewriter.