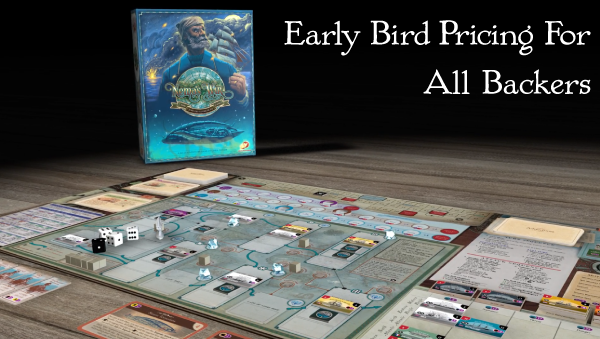 My Kickstarter copy of the second edition of Nemo’s War arrived from Victory Point Games, but I’m not opening it for my birthday. It was a BIT late coming in from the Kickstarter (I originally thought it was going to be a Christmas present last year) but it’s there in a box waiting for its mid July debut in the household.

Anyway, on occasion of that, here’s the secret origin story of how I got involved in this whole crazy solitaire gaming hobby. You’ll note that I’ve since become aware of a whole slew of additional solitaire gaming companies, like White Dog and Hollandspiele and DVG and Decision Games, to mention just a few more. And there’s a great new updated Barbarian Prince download, which I detailed at Black Gate.

You’ll notice that I mention the tactile pleasure of sitting down with a board game. I’ve grown to appreciate that more and more. I spend so much time hunched in front of a computer already. I feel — without any kind of medical study backing me up, mind — that it must be exercising a different part of the ‘ol brain than working with a computer does, and I’m sure learning all the rules and mastering different tactics is good for stretching the gray matter. That, of course, is the side benefit, because the game play is FUN.

But if I keep blathering I’m going to completely lose track of the whole point of re-printing an article because I’ll have spent too much time typing this intro! I must spend a chunk of the day working on the secret sword-and-sorcery product before I get to writing, so I’d best get to it. Here’s what I knew about solitaire gaming back in 2011: 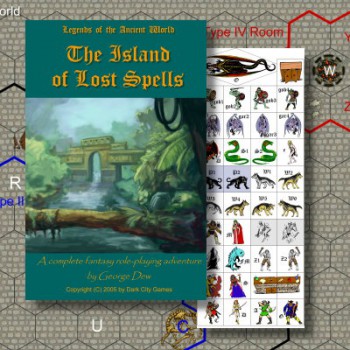 I blame the whole thing on John O’Neill.

A few years back I asked him about the solo Dark City Games adventures that Andrew Zimmerman Jones and Todd McCaulty had reviewed so favorably for Black Gate. John happens to have a larger game collection than most game stores, so I’d come to the right person.

That was Barbarian Prince. And yeah, it was pretty nifty (you can try it out yourself with a free download here, along with its sister solitaire product, Star Smuggler).

I started playing and enjoying the products created by Dark City Games, which the rest of the staff and I have continued to review for the magazine. 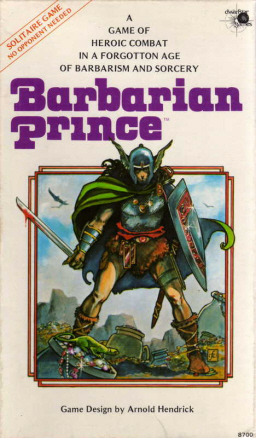 The most obvious analogy is to say that solitaire games are a little like computer adventure games played with paper, with dice and cards taking the place of a computer game’s invisible randomization of results.

My first thought was something along the lines of “how quaint,” but it turns out that while the play experiences are similar, the flavors are slightly different, even if playing them stimulates similar centers of the brain.

It’s like switching off orange pop to try some root beer, or vice versa. You may not drink one or the other exclusively, but they both sure are sweet on a hot day. 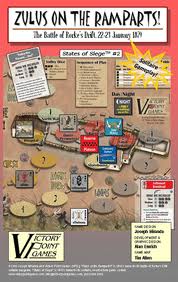 “You mean your only plan is to stand behind a few feet of mealie bags and wait for the attack?”

While playing a solitaire game you may not see any computer graphics, but your imagination will paint some images for you.

And there’s the tactile pleasure of manipulating the counters and looking over the game board and flipping through the booklet and rolling the dice.

Solitaire in no way means that you will get the same game play each time, and to my surprise I’ve discovered that a well designed solo board game has better replay value than many computer games.
It turns out that Dark City Games isn’t the only producer of solitaire games, for I stumbled upon another company, Victory Point Games,  that creates and sells solitaire and traditional multi-player games. For perhaps the first time ever, I was able to get John hooked on games he himself hadn’t heard of before me, which warmed the cockles of my cold, cold heart.

VPG has created an entire series of solo tactical and adventure games. The one that first caught my eye was Zulus on the Ramparts, not because it seemed like an ideal fit for Black Gate readers, but because it was based upon the Battle of Rorke’s Drift, known to me because it inspired one of the greatest (and manliest!) war movies ever filmed, Zulu — the true story of a tiny British outpost manned by approximately 140 soldiers who were under attack by thousands upon thousands of Zulus. Through guts and luck and some inspired leadership, the British survived. And here was a game that simulated those events. 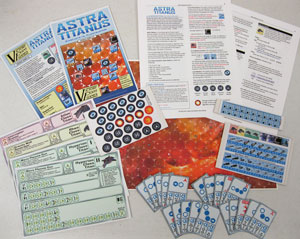 Only your starfleet stands between the robotic star titan and the outposts of the empire.

But then I saw a whole bevy of Victory Point Games — there was Nemo’s War, which allows you to travel the steampunk seas aboard the Nautilus, and Astra Titanus, where you’re controlling a starfleet trying to stop a giant ship/planet killing robot machine.

It’s Astra Titanus I’ve been trying first, and having great fun. I hope soon to have a full length review, but the game comes with multiple scenarios, and I haven’t had an opportunity to try more than the first one yet (and a few times, owing to the fact that its clever design means the game never plays the same way twice). There are, in fact, lots and lots of games from Victory Point Games, as well as a whole bevy of great fantasy board games from other game makers, both traditional and solitaire, and I plan to be discussing all the best of them in the coming months, both online and in print.