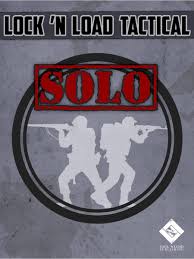 Sunday I spent an hour and a half with Lock ‘n Load Tactical: Heroes of Normandy. When I’m away from the game I worry that the play might grow stale, but all my fears are allayed the moment I start on a scenario. Now that I know the rules it plays so very fast, and I have a blast every single time. I’ve been saying it’s ONE of my favorite wargames, but I may just have to break down and declare the Lock ‘n Load Tactical system my absolute favorite.

Every scenario can be played multiple times, because every scenario is a little different, and multiple decisions and die rolls vary the outcome. Keep in mind that every game box comes with a ton of scenarios (I think that there are more than 30 in Heroes of Normandy) and then there are additional scenarios in the Compendiums, so you’re really getting your money’s worth when you buy into the system. Add in the solitaire cards and the results are even more surprising, and re-playable. Each box is a game full of multiple games. 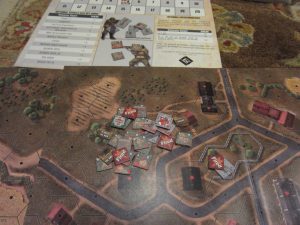 The maps and counters are gorgeous, the play is fast… It’s just an exciting time. I probably have more than enough scenarios to last me for years, but I am determined to get them all anyway because I can’t imagine NOT playing this system.

Sunday’s scenario was “The Road to Foucarville.” The photo is from the last turn. I kept winning initiative as the allies or it would have been a lot closer. Here in the final turns there ended up being a huge amount of carnage and extra counters generated… and then two heroes got generated on EACH side, which simply took the fun factor and challenge up a couple of notches.

If you want a more in-depth look at how the game works, I wrote about it last year at Black Gate. Keep in mind at that point the game hadn’t been re-released yet. It’s out now, and so is the solitaire system, which I’m now using, and love just as much as the base game. You can find the entire Lock ‘n Load Tactical game line here.