Conan in the News 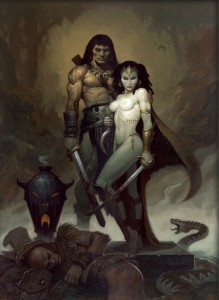 Conan and Belit by Brom.

So here’s a thing. Conan the Cimmerian is going to have a new TV series from Amazon. Good? Bad? I like that those involved say that they’re long-time fans of the character and want to keep him true to how Robert E. Howard wrote him, but I will withhold judgment until I see what they have wrought. Fingers are crossed. Here’s a link if you want the details.

I’ve gotten tired of being in a holding pattern as my in-house editor (i.e. the wife) works her way through the final draft of the most recent novel. It’s not her fault that she has a real job and can only read it on weekends and at night, and she’s made huge progress, with less than a quarter of the book left to re-read. But I’m still tired of being on hold, and as I’ve finished the basement organization I’ve pulled out a Dabir and Asim story and started work on it. Maybe I can finish it this week. Maybe I can actually write enough of ’em this year to do what I planned last, which was to put out another collection of their short stories!

Tales From the Magician’s Skull, issue 1, is heading to the printers soon (actually it may already be there) and issue 2 is heading to layout. I’m putting the finishing touches on the editorial and need to send a few e-mails out to advertisers. I’ll have further updates as it all comes close to release, but I’m mightily pleased, and it’s a thrill to be working with such a good team of folks. I’ll make my second public appearance as editor of the magazine, and first with actual magazines in print, at the Windy City Pulp and Paper convention this April. I hope I’ll see some of you there! I’ll be at the Goodman Games booth some of the time, but I’ll also be haunting the dealer booths looking for old paperbacks. 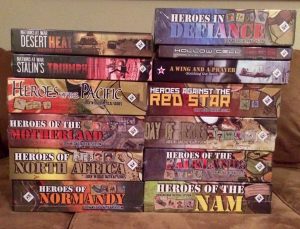 The only other Jones news is that I’ve been selling off a lot of my board game collection, in part because after splashing the field I now know what I like and what I don’t. In general I prefer tactical games that help tell a story, and that don’t have immense playing times. On the whole, the operational games — where each counter represents a huge bunch of soldiers — don’t really do it for me, although there are occasional exceptions. I suppose the deciding factor is just that — decisions. I want the choices I make to have an impact in the game. I don’t simply want to be along for the ride.

I’m also enjoying heavier games, where there’s more detail involved. Lock ‘n Load Tactical has absolutely hit my sweet spot there and I’ve decided to trade away other stuff so I can get their scenarios. Here’s a pic of somebody else’s stack of goodies. Someday I hope mine will tower as high. I’ve gone on about it at length before, but in case you missed that, here’s a link to my review of the game (before the solo expansion and larger boxes came out) over at Black Gate. 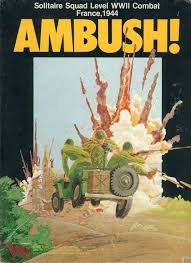 In the previous paragraph I wrote “in part” because there’s another part — I feel like I gave up on the Ambush! game system too soon. It sure as heck tells a story, and it sure as heck is tactical, with lots of options. Now that I’m comfortable with more complex wargames, I think it would be right up my alley. It’s out of print, but I’ve found a kindly fellow who’s willing to part with his copy for reasonable prices.

Ambush! was among the first board wargames I tried, and some years ago I thought it too time consuming and fiddly. Now I understand that you need to put time in on a rule system before it starts playing quickly, and that sometimes “fiddly” means there’s lots of good detail. Sometimes it means that it’s fiddly, of course, but Ambush! and its expansions have a reputation for delivering great stories, and that’s a good part of the reason I play these games. Also to keep the ‘ol mind nimble, of course. If you want to read more about it, wander on over to BoardGameGeek and look at the reviews. It’s unlikely to ever be reprinted, alas.