The Skill of Asking

This morning I’m turning my blog over to the talented Suzanne Church. I was first introduced to Suzanne in 2011 at DragonCon by John O’Neill, and found her witty and extremely kind, but I had no idea what a fine writer she was until I attended one of her readings at the 2012 WorldCon. I’ve been a fan ever since and have made sure to attend every single one of her readings at any convention where we’re both in attendance. I went out of my way to track down several anthologies just to have copies of her work, and I’m excited to learn about her new short story collection.

Anyway, take it away Suzanne!

The courage to ask is a powerful tool for any writer to keep in their
skills toolbox for promotion, research, and critiques.

Attending conventions that celebrate your genre of writing can boost your career as well as motivate you to write. Ask the programming committee if you can speak on a panel or do a reading to expose more readers to your work.

Right now I’m deep in the process of promoting ELEMENTS: A Collection of Speculative Fiction. Part of that promotion has involved an endless stream of opportunities to ask. 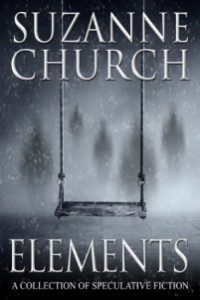 I asked several bookstores to host launches for the book. All of them said yes.

I asked several radio stations for the opportunity to talk about my book and writing on air. I’ve had nothing but positive feedback so far.

A big component in the writing process is the research of setting locations, character occupations, and plot events. The more accurate the details of your book, the richer the adventure will feel to your readers.

In many jurisdictions writers can apply for travel grants to either research the location where the story is set or to attend a convention to promote the book. Check out the arts council websites in your city, state/province, and country to ask if you qualify for this type of grant.

Is one of your characters a police officer? Ask at the local police station to interview an officer with the same rank working in the same department.

Does the sun cycle into the red giant phase in your story? Ask a physicist if you’ve written the scientific details accurately.

Writers need feedback on their work, especially when immersed in the editing phase.

One of my writers’ groups, the Stop-Watch Gang has a strict rule during critique sessions.
The person doing the crit has only five minutes for their comments. No one else is allowed to interrupt (including the writer in the hot seat, having their story critiqued). One of the most informative parts of the meetings happens after, when the person in the hot seat can ask follow-up questions and plot-noodle about new directions the story can take.

If you don’t belong to a writers’ group, ask about writers-on-the-lookout at your local library or favorite bookstore.

To sum up, asking is sometimes difficult, but if you hone your asking skills you’ll reap the benefits in every aspect of your writing career.

Suzanne Church juggles her time between throwing her characters to the lions and chillin’ like a villain with her two sons. She writes Science Fiction, Fantasy, and Horror because she enjoys them all and hates to play favorites. Her award-winning fiction has appeared in Clarkesworld, Cicada and On Spec, and in several anthologies including Urban Green Man and When the Hero Comes Home 2. Her book ELEMENTS: A Collection of Speculative Fiction is
available at bookstores (April 1 in Canada and April 30 in the US) and Amazon
from EDGE Science Fiction and Fantasy Publishing.