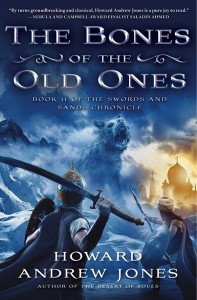 My friend Troy asked the other day about my ” ideas on usage of language – how you change it per the setting and world you are writing in, how you find not only the narrator’s voice, but the voice of your characters.”

When it comes to altering language for the setting and world, most of the time I turn the dial only a little. The big exception would be the historical fantasies I’ve written in the voice of an 8th century Arabian swordsman. In preparation for writing those I read a lot of translations of work written from around the same time I set the stories in, and that prose was a lot more formal. Many of the writers were also highly religious, sprinkling in praise to God every few sentences or so. I knew that if I wrote in exactly the same style I’d put off modern readers and erect a barrier between them and the work, so I wrote in sort of a faux version of that. It’s a little more formal and flowery, so that it sounds different without (hopefully) being too distant. I mention praise to God every now and then but far, far less often, and the sentence structure is more varied.

When writing my Pathfinder novels I went with a more direct, hard-hitting style. I wanted to convey the onrush of action without a whole lot of extra verbiage, although sometimes that verbiage goes pretty purple because I’m fully aware that these books are like a modern descendant of the pulp fiction I love. 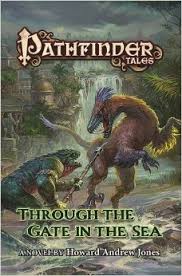 By the time I got to the third and especially the fourth of these Paizo books (Beyond the Sea of Stars and Through the Gate in the Sea) I think you can see the influence of the hardboiled writers I’d begun reading, because the tone is even a little more terse, and hopefully a little more powerful.

I’ve written only a handful of the Hanuvar short stories, which is odd given how much thought and time I’ve put into developing them. I’m really pleased with the tone I’m using, where if you read between the lines much more is implied than is actually stated. At least that’s my intent.

In the newest novels, as yet unreleased, I think I’m closest to my natural style, which is mostly lean, but occasionally decorative when the moment seems right.

The trick is to make sure that your characters don’t all sound like the narrative voice. In my initial drafts I tend to use a lot of dashes and semicolons and one of the things I have to be careful of is that my characters don’t talk exactly the same way that the description and internal thoughts read. I have to go through multiple times and re-read and strip that stuff out.

It’s possible also to go TOO far and make your characters all sound so different from each other that it’s distracting, or like a parody. I’ve learned that it can be better to suggest a little variety with just slightly different tones and expressions rather than going full tilt. This is a related technique to that faux ancient feel I mentioned above when discussing the tone of my ancient Arabian historical fantasies — you can suggest more than there actually is, taking it halfway or even just a quarter of the way there without taking it so far that it’s annoying to readers.