…Or maybe I beamed up. In any case, I finished the rough draft of my seventh book yesterday. (In D&D terms does that make me a seventh level writer?)

So what did I do afterwards? I treated myself to a big ‘ol cheeseburger, owing to the fact that a far more delicious vietnamese dish is, alas, a 30 minute drive away. After that I sat down to start outlining book number eight. That’s what you do when you’re trying to make a living at this business. I did allow myself a little sense of satisfaction, however, because I stayed on target. I began the 90k manuscript on June 30, and I finished it in just under two months. That’s my fastest rough draft yet, undertaken with a solid outline, a firm knowledge of my characters, and steady effort.

I’ll leave the current manuscript to cool on the window sill for a few days before I start revising. It’s nice to completely switch gears and work on something else.

In my spare time I finished the Captain Blood books, which I hope to discuss in depth at Black Gate in the near future. And I took the advice of James Reasoner and Morgan Holmes, who both commented in my Pulp Swashbuckler‘s post last month, suggesting I try some of the work of F. van Wyck Mason. 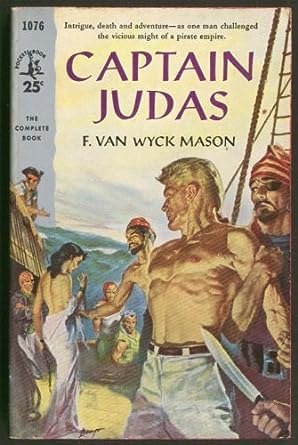 Mason’s going to be getting a whole post of his own, soon. The first two books have been swift reads, and have done a better job of schooling me in sailor talk than any other historical fiction I’ve ever read, and that includes the Hornblower books. Captain Nemesis had some rough plotting, but Captain Judas rollicked along nicely. It’s one thing to read up on how these old ships worked, but it’s another to see how a good writer brings all those details to life. I’ve definitely been making some notes about improvements I need to make in the speech of my characters when I tackle the revisions of the last two books.

There’s no sailing at all in the newest one, so I can go back to plain old common experience with my own horses to bring transport in this one to life.

I’ll just add one more thing — this book writing stuff does get less taxing. Book two was harder than book one, and books three and four were a little like pulling teeth, but steady work had rendered the process simpler.

Writing well still takes discipline and concentration — but just as writer Troy Denning was saying to me at GenCon, the more books you work on, the more you get an instinctive sense of the ebb and flow of the process. I’m starting to sense when a different scene is needed than one planned, when a character needs to be cut, to stop before I go too far down the wrong path and write a bunch of chapters that have to be eliminated. There are other things, too, that I’m getting right by feel more than through conscious thought, so that the rough drafts aren’t as rough.

Now some of my writer friends out there have done this instinctively from the beginning. As for me, I’ve had to learn. Slowly but steadily I’m getting it all worked out. I’m sure I’ll keep discovering new mistakes to make, but in the mean time I feel like I’m learning better how to work hard AND smart in this crazy business I’ve decided to make my own. David Coe (aka D.B. Jackson) wrote about this at Black Gate just a few months back, and I didn’t have the wit to remember it was his essay that had resonated so strongly with me when I met him in person. I’m terrible with names…