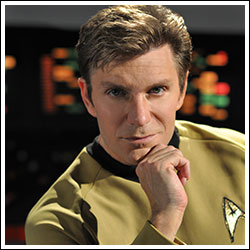 I’m not a drinking man myself, and for all I know, he might not be either. But he deserves that drink, be it scotch or root beer. Not just because Mignogna brought to life my favorite anime character (Edward Elric, from Full Metal Alchemist: Brotherhood –for which Mignogna received a best actor award) but because he got Kirk right.

If you’re not a fan of the original Star Trek series you can probably stop reading here.

Mignogna didn’t just get Captain Kirk right, he was one of the executive producers, not to mention the director, of an excellent fan produced Star Trek episode, Pilgrim of Eternity, written by  Steve Fratt and Jack Trevino. (Everyone involved deserves a round of drinks.) He also was responsible for scoring some additional music for the episode.

That’s not all — Mignogna also had the courage to admit that he loved the original series so much that he used to tape record episodes… which I somewhat shamefacedly must admit I did myself. That was in the days before videotape, understand, so that was the only way to possess a copy of an episode, short of breaking into the local affiliate broadcasting the reruns and making off with the film. 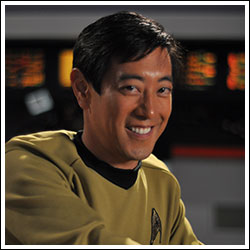 Yes, that really IS who you think it is playing the part of Sulu…

I don’t want to gas on for too long here — I’ve got a very long post about to go live over at Black Gate that will provide you with far more details, but Mignogna was instrumental in bringing to life a dream shared by many: giving us one more Trek episode that felt like the original show.

Mignogna has a vocal range that’s pitched higher than Shatner’s. But everything else is just about pitch perfect. He has the body language down. He moves like Kirk in large ways and in small. He avoids performing a caricature of William Shatner because he’s not playing Shatner, he’s playing the character Shatner played. He seems to understand what the reboot got so wrong: Kirk’s a dedicated, driven serviceman whose ship and crew come before everything else. He rose through the ranks because of his talent, and he’s been hardened by tragedy and triumph in the face of adversity.

Most Trek fans like Kirk not because of the cheese or because in ‘60s TV he was often depicted as a skirt chaser, we like him in spite of those things and wish we saw less of them. In the best episodes Kirk’s a professional. Mignoga is playing that Kirk. The one we saw when the scripts were at their best. When, mid-way through the episode, Kirk gives one of his patented speeches even when his life hangs in the balance, Mignogna is channeling the same character. It’s just an incredible performance.

Now for all of this praise there’s a caveat: don’t go clicking over expecting to see another “Doomsday Machine” or “The Trouble with Tribbles.” It would hardly be fair to expect a team of people doing all of this in the spare time to have produced something to rival the series greats. But this script could easily stand up beside many a B grade episode, like “By Any Other Name,” or “The Return of the Archons,” say. It’s impressive work, and better than a huge swathe of third season episodes. My hat is well and truly doffed to writers Steve Fratt and Jack Trevino. They get Star Trek.

As I said above, I’ll have a more extended review over at Black Gate, along with some praise for some additional cast members, some of whom are truly outstanding. If you’re an original series fan, take some time this evening and go watch this episode.