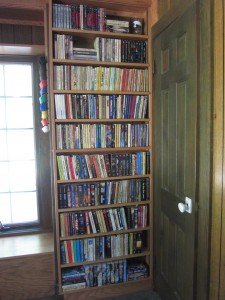 Half of my paperbacks, just east of my desk.

While on the way back and forth to the Virgin Islands I spent several hours on airplanes and even more hours in layover airports. What better time to whittle down my to-be-read stack? Not owning a Nook or a Kindle, I usually don’t take big modern fantasy books, but slim paperbacks, which slide in and out of the carry-on case a lot more simply. And I have to confess that I feel like I’m making more progress if I knock through a series of shorter books. I DO have a large TBR list, after all.

On the way down I read Dan Marlowe’s The Name of the Game is Death,  a riveting noir novel about a guy who’s not quite as much of a sociopath as he seems, set in some semi-tropical places. A haunting and powerful crime drama and character study. Then I tried another Wade Miller, Dead Fall. So far the team of Wade & Miller (two guys under one pseudonym) haven’t let me down. Even their standalones, like this one, are pretty riveting. The mystery was excellent and kept me guessing. Unfortunately, this one had the most “slap you in the face with its ’50s sexism” ending I’ve yet found in their work. Wade & Miller frequently featured strong women, so this was actually a departure for them. I’ll write up a longer article about their work some time soon, because they wrote some overlooked gems.

On the way back I read fellow Pathfinder author Chris Jackson’s Pirate’s Honor and found it a  compelling nautical adventure tale, with strong action scenes and good character arcs. And then, on the final leg (and in the hotel room the next morning — we arrived too late to make the two and a half hour drive  home after a day of plane travel) I read a Ben Haas (writing as Ben Elliot) western titled Brother Badman. It was a little more paint-by-numbers than his later work, but it was still a cracking good action tale with good story beats. I’ve yet to read a bad book by Haas. 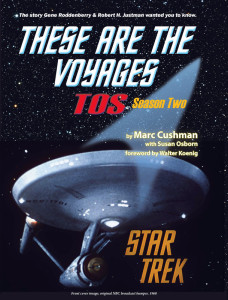 All this reading took place several weeks ago, while I was on vacation. My prose intake has slowed down immensely, as it always does when I’m in work mode.  Huge Star Trek nerd that I am I recently read the fresh release These Are the Voyages, Season Two, a fascinating behind-the-scenes look at how the second season of the original Star Trek was written, produced, shot, promoted, etc. If you’re not into Star Trek you’d be bored to tears, but if you are, it’s astonishing to learn any number of things, like how hard it was to keep good scripts coming in (most writers just didn’t “get” Trek), how hard it was to get the effects shot in time, and, finally, that Star Trek was actually doing much, much better in the ratings than we’ve been told for years.

Seriously, if you loved the original Star Trek, you should read the book and it’s predecessor about season one. A behind the scenes book about season three will be released later this year.

Apart from that and research on my various writing projects, I’ve been working my way through the second collection of Robert E. Howard boxing stories, which I’ll discuss later this week. I’m not boxing fan, so I wasn’t entirely sure what I was getting myself into. Details soon.