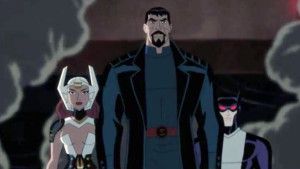 I don’t know that I’ve ever mentioned it on this blog, but I’m a huge fan of Batman: The Animated Series, Justice League, Justice League: Unlimited, and, to a lesser extent, Superman: The Animated Series, and Batman Beyond. I loved the animation style and (for the most part) the character designs, but most importantly — because a cool look matters not at all if the tales are poor — the storytelling. It was usually top-notch, head and shoulders above cartoons of the time and at least equal if not superior to the best modern cartoons as well.

That’s why, when I learned there was a new Justice League movie being released with one of the most important of the original crew overseeing it (i.e. Bruce Timm) I immediately put the movie in the Netflix queue. I didn’t know anything much about it, except that it was with some kind of alternate Justice League. 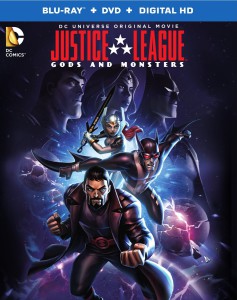 I watched Justice League: Gods and Monsters over the weekend, and boy, was that 72 minutes of grand adventure. I didn’t know what to expect. Turns out that there was all kinds of news about the  movie, including three animated shorts, some tie-in comic books, and a whole blast of publicity.

I’m not really tuned in to comic book or animated news these days because I’m running for so many deadlines, so I was completely surprised by what I saw. If you’re a fan of this stuff and you haven’t heard anything about it, take my advice and go watch it before reading any further, because I think walking into it unprepared was one of the best things that could have happened.

Seriously. If you like the DC Animated Universe and don’t know anything about this movie, stop reading, now, and go watch it. Don’t read anything more about it from me or anyone else!

Alright. So Bruce Timm decided to revisit The Justice League with alternate versions of the big three: Superman, Batman, and Wonder Woman. I kept thinking that this was going to be an alternate version of Earth that had unethical, criminal versions of the characters and that the real ones would show up and bash things into order. As Darian Jones says, turns out that no. And this alternate Justice League isn’t actually as evil as they first may seem, but they don’t really work very hard to pull their punches. 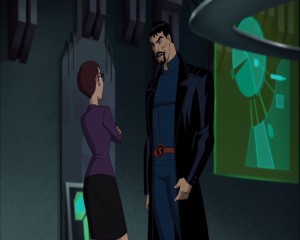 I honestly think I like the origin of two out of the three of them better than those of their counterparts in the regular DC universe. There’s so much new story potential with them. The DC Animated Universe did such a fantastic job with Batman that there’s no topping him. I enjoyed alternate Batman, but I loved this universe’s Superman and Wonder Woman.

We see Superman’s origin in the opening scenes, and it’s one I’m so familiar with that I wasn’t paying attention at first, assuming that I was just getting a re-hash. Remember General Zod, the Kryptonian maniac who in the DC Animated Universe is the villain trapped in the phantom zone? In THIS reality, it’s his son rather than the kindly Jor-El who gets rocketed to Earth. Rather than being found by the Kents, that child is discovered and raised by migrant workers. We don’t see the rest of Superman’s upbringing, but we can infer through various asides that it left him hardened and aloof, though not without compassion. He’s torn between the desire to set things right and simply take over and run the world properly.

A major portion of his character arc is learning that his father wasn’t a hero of Krypton, but the man responsible for its destruction because of his own obsession with power. Talk about a conflicted hero! The story potential from this version of Superman is so brilliant it emits sparks.

I was just as taken with alternate Wonder Woman. In some ways she’s more of a straight-up do-gooder than the others —  but instead of being Diana Prince, raised on a hidden island, she’s a minor DC character I’d never heard of, the wife of Jack Kirby’s Orion, from the New Gods… except here she’s the widow, fled to Earth in disgust after her own family turned on her husband. She has a pretty remarkable, and awesome, sword that she wields to great effect.

There are appearances by alternate versions of any number of DC mainstays, some in cameos and some in important parts, like Lois Lane (who seems to despise this Superman) and Lex Luthor.

In short, if you like this kind of thing, particularly the DC Universe, you’re REALLY going to like this thing. Go get it. I’m going to pick up a copy to own (which I almost never do) because I can imagine re-watching it. And I’ll be tuning in to see the ten new episodes that I hear are being produced next year and keep wondering whether or not they’ll be more five minute episodes like the three previous, or full 20 minute adventures.

I might even try the comic books, and I’ll keep fingers crossed that there will be another movie. Just as I used to imagine how much fun it must have been creating new villains for Batman Beyond inspired by the roles Batman’s villains used to play, I can’t help thinking of all the fun Timm must have had coming up with alternate takes on any number of DC stalwarts, and how much fun it will be to watch what he does with them. I hope he has plenty of opportunities to play in this sandbox.

Hell, I might even dream of writing for them, except I have plenty of projects on the burner already…

Check out alternate Superman in this animated short. See if you can spot a different role for Captain Marvel’s long-time advisory.

Here’s an extremely well-written, well-considered review of the movie that I agree with almost completely.