Conan and the Emerald Lotus 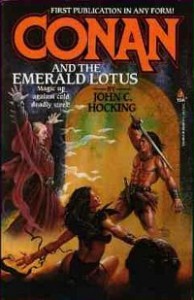 THIS is one of my favorite Conan books. You’ll note that it is not by Robert E. Howard. Howard himself actually wrote only one full-length Conan novel, as Conan was aimed at Weird Tales, a short story market. (If you’re THAT curious, you can go read up on REH at various sites.) I will add that it is my favorite pastiche Conan, ever, much as I greatly enjoy some of the John Maddox Roberts Conan novels. And it’s better than Karl Edward Wagner’s Conan novel The Road of Kings (often the default “best pastiche” answer) and ANY Conan novel by Robert Jordan.

Conan and the Emerald Lotus was written by John Chris Hocking about twenty years ago. A big fan of Robert E. Howard, noir, and Weird Tales, Hocking wrote Emerald Lotus and sent it in, unagented… and because it was so danged good the publisher snapped it up and printed it. (In case you’re wondering, that NEVER happens.) The second Conan novel by Hocking, as it turns out, is even better, and L. Sprague de Camp relayed to Hocking that de Camp and his wife were so eager to see how it unfolded that they sat together on the floor of their study turning the pages. Conan and the Living Plague, unfortunately, never saw the light of day even though it was intended to re-launch the Conan line, because the purchasers of the line seemed uninterested in anything that had come before.

Conan and the Emerald Lotus, however, is still available. It is such a fantastic adventure romp that by the first third of the book I was saying out loud to myself: “wow, this guy really knows what he’s doing!” I was also saying “I have got to talk to this guy.” Because Hocking was a friend of a friend, we were soon exchanging e-mails and he’s now one of my closest personal pals. But even if he had ended up being an antisocial doofus, I’d still be raving about what a great sword-and-sorcery adventure this is. If you want, search for my name and Emerald Lotus and you’re bound to turn up one or two quotes.

Because this is sword-and-sorcery, and because, moreover, it’s pastiche, you won’t find too much additional discussion of its excellence… except suddenly, in the last few weeks. Conan and the Emerald Lotus has been read by two fine writers, Evan Lewis and James Reasoner, both of whom feature the book and discuss its plot and strengths in detail. If you haven’t ever believed me, go read what THEY have to say.

From time-to-time people ask why Hocking was writing tie-in fiction. Well, he loved Conan, and he wanted to see the character handled properly if he was going to be written. And then, it must be remembered, in the ’80s it was hard to get sword-and-sorcery on the shelves UNLESS you were writing Conan or your name was David Gemmell.

And WHY oh WHY haven’t the powers-that-be ever put Hocking’s other Conan novel out? In recent years they’ve published a set of poorly received novels set in Conan’s world (apparently each of the authors was only given 3-6 months to write THREE books), and they oversaw Harry Turtledove’s poorly received Conan novel, but did they ever think to publish a novel ALREADY written by one of the two Conan pastiche writers alive who is still getting good ratings and reviews?

If so, they didn’t think long, because it’s never happened. I live in hope of many things, but one of them is that someone in power there will finally wise up and publish Conan and the Living Plague. If they’ve really got their act together maybe they’ll even hire Hocking to write the others he had planned…

Anyway, if you like sword-and-sorcery and good adventure fantasy, just go read the book.

I’m going to stop grumping and get back to writing my Hearthstones novel.