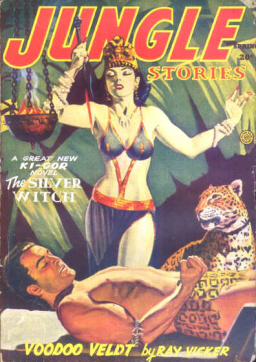 In graduate school one of my guilty pleasures was reading some pretty mindless escapist adventure. From the middle to the end of semesters things could get more than a little hectic, what with all the projects and research papers, and it was nice to be able to just pick up a story and be entertained for a while by my old friend Ki-Gor. But who’s Ki-Gor? A Tarzan clone? And how on Earth (and why?) did I get interested in reading about him?

Some years back, at Pulpcon, I was wandering around the dealer room with writer John C. Hocking and sword-and-sorcery scholar Morgan Holmes. I stopped to chuckle at a ridiculous-looking pulp cover on display at one of the booths. Jungle Stories was emblazoned upon the masthead. Below, a beautiful and clearly evil dark-haired woman loomed over a bronzed jungle-man bound to an altar. Morgan said, “That’s actually a pretty good story.”

Knowing that Morgan Holmes is better read on sword-and-sorcery (and any kind of heroic fiction, really) than anyone else in existence, his comment pulled me up short. And then Hocking chimed in as well. “Some of the Ki-Gors are pretty great stuff,” he told me, then added caveats, which I’ll detail in a moment.

I took the chance and picked up that 1950s issue of Jungle Stories. I wasn’t quite sure what I’d get, but what I didn’t expect was an action-packed adventure with glowing zombie-men who disintegrated into ash when slain, or the machinations of an ageless sorceress intent on… well, I don’t remember what she was intent on, really, but she wanted to conquer something, and she fell for Ki-Gor, hard, as scheming villainesses do. It was ridiculous and over-the-top and certainly not politically correct, but at the same time it was thrilling and firing on all cylinders. I had the inescapable sense while reading it that the writer had said to himself, “Well, if I’m being hired to write a cliched jungle adventure I’m going to make it the best cliched jungle adventure I possibly can.” And so he had. It was a blast, cliches and all.

I had stumbled outside of my genre comfort zone and discovered something fascinating. I had to find more Ki-Gor. Who was he, and what about these Jungle Stories? Were they all this much fun, with so many fantasy elements? 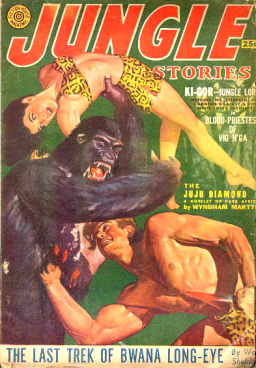 It goes without saying that without Tarzan, there would be no Ki-Gor. The blond-haired jungle-man was crafted to meet the tastes of a public with an insatiable appetite for the adventures of Burroughs’s hero. Ki-Gor was not the first Tarzan clone, but he seems to have sustained the longest known run of any of Burroughs’s imitators. This was partly because there was money behind Jungle Stories, the pulp that printed the adventures of Ki-Gor for close to 17 years, from 1938 to 1954. For most of that run, readers could head to their local newsstand once every quarter and find the mighty Ki-Gor emblazoned across the cover wrestling a giant snake or a lion or an angry native, while his gorgeous “flame-haired” wife posed nearby in a two-piece leopard-skin bikini (frequently bound and sometimes gagged, which has made the covers popular amongst another set of collectors).

Each issue of Jungle Stories opened with a Ki-Gor “novel” (meaning a piece that came in between 20 and 40 thousand words) followed by shorter stories of unrelated characters. Ki-Gor was the magazine’s real draw, and his escapades backed up the promise of the covers, for there were dangers aplenty to be overcome by the jungle lord. The prose was purple, the action relentless, and cliffhangers closed almost every section.

While on the surface Ki-Gor sounds very much like any other Tarzan-inspired pastiche, he often rose above his humble origins. Written as he was by a house name, the true authors of Ki-Gor’s chronicles are little known, which is why we can’t be sure why a number of them are so much better than they really deserve to be. Close to a third of Ki-Gor’s adventures stand head-and-shoulders above the rest. The prose is tighter, the characters deeper, the setting more vivid (and frequently more bizarre) than almost anything Burroughs ever cooked up for Tarzan. The best of them crackle with the kind of energy visitors to the old pulp mags expect and almost never find. The worst though, ye Gods. They can be stinkers.

Under different hands, all the characters fare differently, but none so much as Tembu George, Ki-Gor’s friend and chief of a tribe of Massai warriors. In the bad Ki-Gors he’s a humble former southerner with a step-and-fetch accent, eager to please. In the good Ki-Gors, Tembu George is noble, brave, resourceful, and simply way, WAY cooler than you’d think any black man would be in a 1950s magazine aimed at white men (he’s actually cooler than ANY fictional black hero I’m familiar with until we get much closer to the modern era). Ki-Gor is color-blind and willingly risks life and limb for Tembu George and his pygmy friend, N’Geeso, more times than you can count, and those two always reciprocate, for the three view each other as brothers. In that way, if none other, Ki-Gor was ahead of its time. 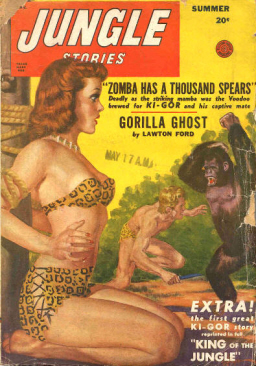 Approximately 59 Ki-Gor novellas were published during the run of Jungle Stories. The number is inexact because later in its run Jungle Stories sometimes re-used covers (upon which a novella title was already emblazoned) and printed a new story using the same name. Sometimes Jungle Stories reprinted the original story, and sometimes it reprinted a different story while reprinting an unrelated cover. The circumstances have led to some confusion about the precise number of stories, and which story has which title. Despite that, it’s possible to safely make several generalizations.

The first three or four years of Ki-Gor, from 1938 to 1941, sound the most dated. Ki-Gor himself isn’t especially clever and the natives are embarrassingly non-pc. After the 13th issue, Ki-Gor began to take on an easy nobility of spirit and his loyal native friends started to demonstrate both independence of thought and real capability. By Ki-Gor’s sixth year of existence, and for many years thereafter, this portrayal became more the norm than the exception, until Jungle Stories lost steam and direction. Lesser Ki-Gors dropped into the mix more and more frequently, and Ki-Gor’s final years were less inventive — although the series ended on a high note.

In all, there are some 15 to 20 good Ki-Gors. Not good in a Proust sense, or good in a unique Tolkien or Jack Vance world-building sense, but good as grand pulp adventures. In them, one can find lost civilizations, evil queens, ancient temples and curses, noble friends, evil schemes, monsters from the dawn of time, mad scientists, telepathy, battles against overwhelming forces, supernatural menace, and above all action with a capital A. Hocking described the good ones as sounding a little like Robert E. Howard or Mickey Spillane writing a Tarzan story. They tend to recycle themes — Helene captured, a lost ancient civilization still existing in the jungle, Ki-Gor framed — but when they’re not read back to back, they’re loopy fun. THIS time, Ki-Gor must save his wife and native women from marauding cave men freed from an ancient valley! THIS time, Ki-Gor must stop a horde of vampiric flying squirrels, commanded by a beautiful telepathic Indian (no, I’m not kidding).

The “good” ones are enough fun that people like Hocking and Andy Beau and I slogged our way through a mountain of bad ones looking for more gold.

You don’t need to think a whole lot about these tales, which made them great for reading in the middle of my grad school studies. If a few days had gone by since I’d had time to read and I’d forgotten what page I was on, it didn’t matter. I’d discover Ki-Gor in the middle of a fight with a crocodile, or Tembu George in furious combat with his shovel-bladed Massai spear, and I’d sit back and enjoy. 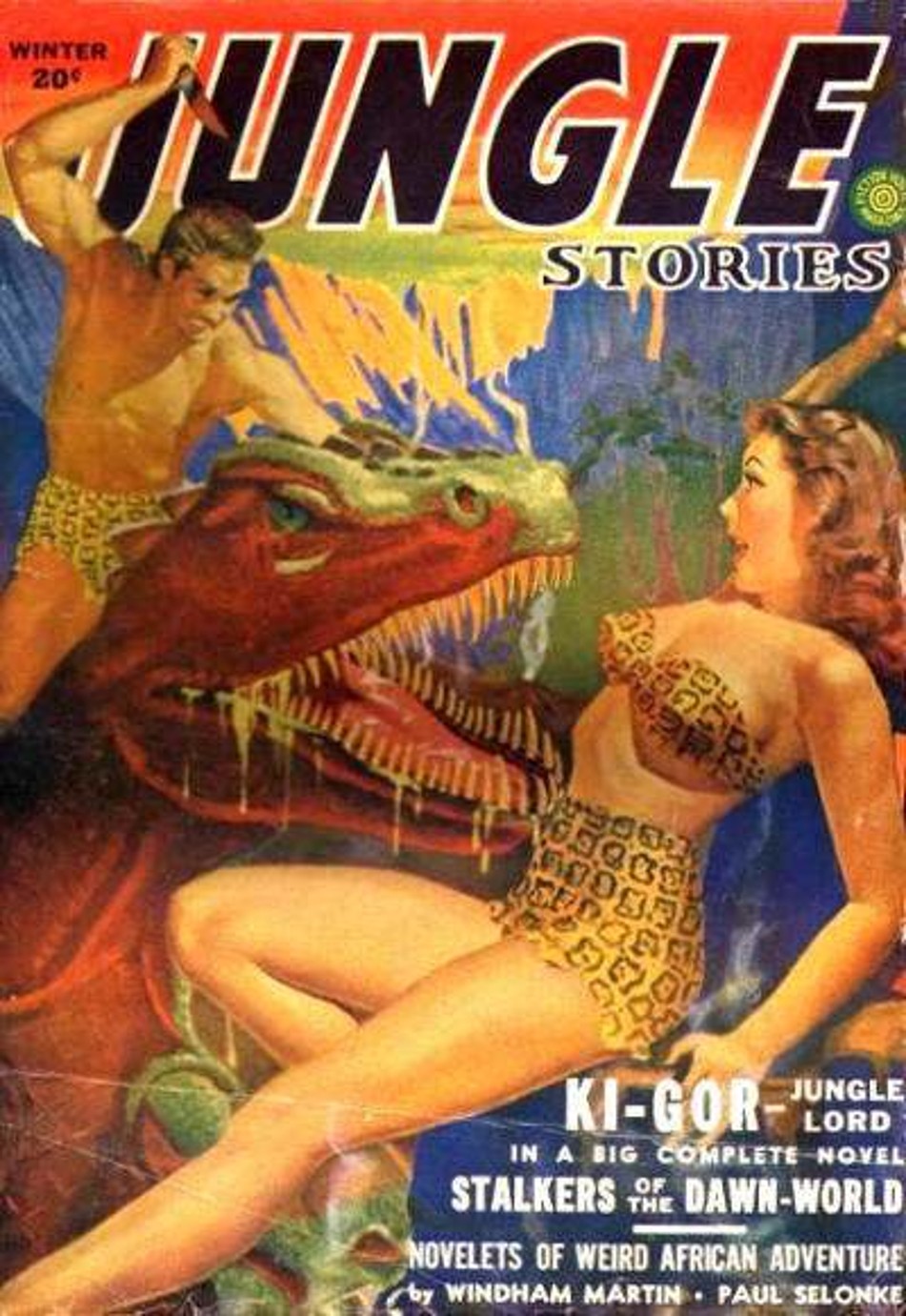 Even a list of Ki-Gor titles is outrageous fun, but there’s nothing quite like the delicious purple of the blurbs that introduce each story. Here are a couple of samples. First, from “The Monkey Men of Loba-Gola” (which, incidentally, had NO monkey-men in it whatsoever):

Ki-Gor, White Lord of the Jungle, tracked a treachery spoor to the Forest of Treasure, challenging lovely, mad Zoanna and her evil Master. But a devil’s trap was waiting. Ki-Gor faced a battle no man might win… against Nihilla Ati, the Invisible Vampire of Death!

And how about this one, from “The Golden Claws of Raa:”

Sam Slater, cobra-eyed merchant of warrior-flesh; Mog, the gorilla with human blood on his dagger-like teeth– and Raa, white queen of the ape legions… these were Ki-Gor’s enemies in a battle that only the voodoo of Fate could decide!

Anyway, here’s my list of the absolute best Ki-Gor stories, in no particular order:

When I published the original version of this article at Black Gate, John Hocking added some comments that are worth reprinting. He wrote:

While the worst Ki-Gors are poor enough to be painful to read, the best ones are so good as to make wading through the bad ones worthwhile.

What the good ones have going for them is a little hard to explain to someone who isn’t a pulp fan. They aren’t classy or clever, and they are emphatically not original.

At their pinnacle what they have is a blazing enthusiasm for formula so intense that you could be forgiven for imagining the unknown author leaping up wild-eyed from his smoking typewriter, flailing his arms and leaping around his garrett in a frenzy of unleashed prose composition.

Jungle Stories collectors have generally agreed that “Stalkers of the Dawn World” is the best Ki-Gor novel, and although there are others I like as much, this may be the best exam 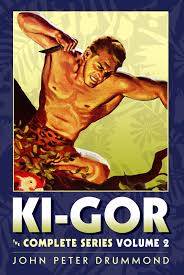 ple of what I’m trying to get at here.

“Stalkers of the Dawn World” is your basic “Jungle Man Rescues Lost Safari in a Valley of Dinosaurs” story. You could probably parse out the whole plot in a few moments even if your entire experience with jungle pulp storytelling was drawn from watching a couple Tarzan movies. Doesn’t matter.

The novel is written in a virtual typhoon of the most outrageously purple prose. Simple descriptions of the jungle attain ecstatic heights while actual scenes of action (including the inevitable climactic showdown between Ki-Gor and a T. Rex) go so far over the top as to qualify as some kind of controlled substance in prose form.

Obviously, this is the kind of thing that people who like that kind of thing are really going to like. A real high point for latter day pulp sensationalism.

In short, the good Ki-Gor’s actually sound like what you think outrageous pulp fiction really should have been like (and almost never was, in truth, because that kind of pacing and action writing is hard to pull off). They’re surprisingly fun. I enjoyed the good ones enough that I actually kept hold of them, thinking I might re-read them some day.

You’ll probably have an easier time finding Ki-Gor than I did and won’t have to haunt pulp magazine conventions to do so, providing you’re patient for just a little longer. There are a series of reprints courtesy of High Adventure, and, for the completists, Altus Press is compiling the entire run. They’re currently up to volume 2, and I understand that other volumes are nearly ready for print. While Volume 3 ought to be the start of the ones I find most enjoyable, it must be said that some readers seem to enjoy them right from the beginning.