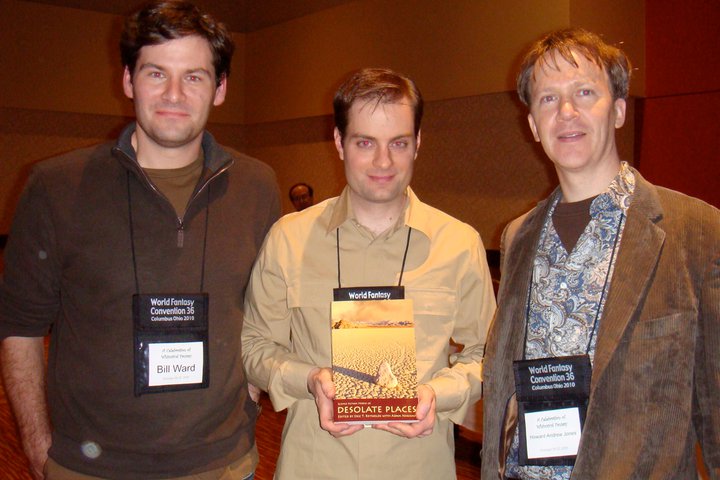 In February of 2011 Bill Ward interviewed me for Black Gate magazine. Back then three things I’d been involved in were coming to life within a few months of each other — my first two novels (The Desert of Souls and Plague of Shadows) and the second wave of the Harold Lamb books I assembled for Bison Books/University of Nebraska Press.

You can find the other portions of the interview at Black Gate, but given that I’m often asked how I got involved in editing the Harold Lamb books, I thought it high time to move this portion of the interview to my own site.

I’d like to thank Bill for asking such great questions. I think it was only the year before that we’d finally met in person, at Dragoncon. In the picture here we’re standing with old friend Ryan Harvey, another brilliant essayist and writer. I have a slightly glazed look because I’ve been up late at the con for several days, and we all have red eyes because we’re vampires. Ryan’s holding an anthology that one of Bill’s stories had just been printed in, Desolate Places.

Anyway, all questions are from Bill. Take it away, old friend:

In part one of Black Gate’s interview with Howard Andrew Jones we heard about one of Howard’s new novels, The Desert of Souls, and the joys and pitfalls of writing fantasy stories set in an historical milieu. In our second installment we talk about Howard’s reverence for the greatly under-appreciated historical adventure writer Harold Lamb, and the massive project Howard undertook to collect and republish Lamb’s fiction to preserve it for new audiences. 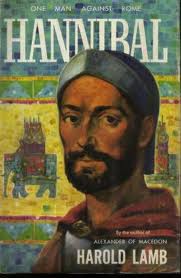 All this talk about historical fiction naturally brings us around to Harold Lamb. When and where did you first encounter his work?

I first found him as a high school sophomore. I had to write a short history paper on a famous historical figure, and I happened to find Lamb’s biography of Hannibal on the library shelves. I loved that book. I had reread books in the past, but they were always novels or short story collections. Hannibal  was the first non-fiction text I revisited again and again. Lamb presented what was almost a Shakespearean drama about a man blessed by the gods with brilliance and charisma, doomed never to achieve the one thing he truly fought for, which was the preservation of his homeland, the citystate of Carthage. A military genius, Hannibal won battles employing tactics that are still studied today, but no matter how clever he was he could not win the war. He had luck in abundance, but it was almost a curse, for while he continued to survive, all those closest to him fell. When he returned home to Carthage after the war he turned his intellect to reforming the state. He eliminated graft and corruption and  overhauled the elective system so that senators, appointed to lifetime power, had to be elected every two years by the people. Though beloved by the commoners his sweeping changes drew only ire from the ruling elite, who lied to Rome, saying Hannibal was still plotting against them. He had to flee his city and wander for the rest of his life, taking employment with more and more distant places as a military adviser while the Romans expanded their holdings. Hunted to the end by Rome, he finally died by his own hand rather than permitting them to capture him alive.

It certainly wasn’t an uplifting tale, but it was a story about a man of integrity and honor who strove the whole of his life for what he believed in, and I deeply admired him for that, as well as his inspiring leadership and military brilliance. Those few surviving personal anecdotes about him revealed a dry, modern sense of humor. Lamb’s presentation of the information made a lifelong Hannibal fan of me (I don’t mention this in casual conversation anymore, as I have grown tired of having to say NOT Hannibal Lecter). I was old enough to understand part of the reason I loved the book was because of the writing, so I looked up other books by Harold Lamb and discovered the first collection of Khlit the Cossack stories. That was the most exciting fiction I’d read since Fritz Leiber’s tales of Fafhrd and the Gray Mouser, and I recognized that I’d found a gifted author. 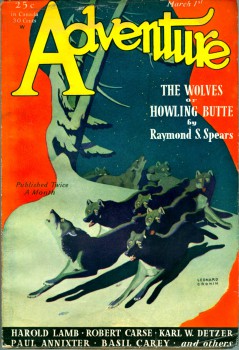 From fan to editor — how did you make the transition from admiring Lamb to actively working to preserve his legacy? The eight volumes of collected shorts from Bison Books must have been a great deal of work — did you realize what a huge undertaking it would be when you started?

When I started I had no idea that there would even be an undertaking. I was just curious about all the stories he’d written that hadn’t ever been reprinted. There were a lot of them. One day while hunting used book search sites I saw two titles offered by the same seller. At that point I knew what all the names of Lamb’s published books were, yet these were unknown to me. I looked into the matter and discovered that these were some complete stories removed from pulp magazines and sewn into hardback covers by the late Dr. John Drury Clark for his personal reading. He had a box full of additional unreprinted Lamb stories, unbound, that Dr. Clark’s widow hadn’t put on the market because, she said, they were in pretty bad shape, though intact. I bought them, and as a result soon owned the bulk of Lamb’s uncollected fiction. It truly was like a treasure trove to me.

What a joy reading those stories proved to be; I savored every moment. I’ve talked elsewhere about the expectation that uncollected works are usually lesser stories — forgettable or early stuff — and how these grand novels, novellas, and short stories within defied that common wisdom. Unfortunately, they were all on dry, flaking pulp paper, and I decided that if I really wanted to preserve these, I’d best scan them, because some were disintegrating every time I turned a page. Those in the worst shape had letters and entire words dropping off from the margins.

That’s how it started. I bought a scanner and optical character recognition software and started preparing the manuscripts in worst shape first. What can I say? It took years, for the OCR process was time consuming, though far faster than typing the texts. I continued to track down other rare stories, assisted by family and friends in my search, and eventually found all of Lamb’s work for Adventure, where he did almost all of his best work. I got to exchanging notes with other Lamb fans, and we daydreamed about how great it would be to have these old texts between covers, and to have the serial stories collected in order, and by and by I started approaching publishers about reprinting the work. Because I’d been a professional editor for many years at that point, it wasn’t that intimidating to talk to another editor on the other end of the phone. What I didn’t know was that even though I’d already put in years and years of work that it would take years more! But the result was worth it, and a lot of good people helped me make it happen. Lamb’s work is too good to be forgotten, and it is my fondest wish that it not only stays in print, but that it will be rediscovered and enjoyed by a widening circle of readers.

It was most definitely worth it, and I share your hope that Lamb’s fiction will enjoy a justly-deserved renaissance. For anyone unfamiliar with Lamb’s extraordinary output, where would you recommend they start?

Readers who don’t know his work seem most responsive when they start with Swords from the West. It’s a fantastic collection of Crusader stories, showing the fall of kingdoms and the dooms of men, desperate battles and brave comrades, shrewd maids and scheming nobles. If you’re already a fan of the Conan stories and Fritz Leiber’s Lankhmar cycle, or love heroic fiction short stories in general, you might start with Wolf of the Steppes, the first of four books collecting the ongoing stories of Lamb’s Cossack adventurers. They’re from earlier in Lamb’s career, but Lamb was so accomplished that after the first short tales in Wolf, Lamb hit his stride and drafted some truly fantastic adventures, sending his character into lost cities, forbidden temples, and some of the most desolate and fascinating places on earth. I fell in love with his fiction because of these tales, and I love them still. 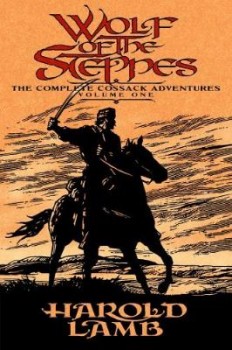 What would you say are the things you’ve learned from Lamb, as an author?

I’m still learning! I certainly try to emulate a command of the historical period I’m writing about, as he did, but I can’t help feeling that I’m building with smoke and mirrors while he was fashioning real structures. The man spoke at least a half dozen languages! I love how he never bothered taking you anywhere that wasn’t interesting to see, and the way he would place his characters in situations that required great cleverness to survive. I have to say that, much as I love rogues and “gray” characters like Fafhrd and the Gray Mouser, I also love the honor of Lamb’s heroes, most of whom would rather die than break their word or betray their convictions. I think those kind of protagonists have become unseasonably out of favor, and their outlooks mocked for being naïve or unrealistic, but  I honestly wish that we saw more characters like them. Lamb was ahead of his time in understanding that good or evil didn’t reside only with people across the border, or folk with different religion. In Lamb’s writing, your most loyal friend might be someone who would have been a natural enemy. He wrote with, as John Miller said, “an honest multiculturalism.” Lamb’s women might not usually have been warriors, but they were vitally intelligent and shapers of events very different from female characters in the work of his contemporaries. I could go on and on about what’s great about Lamb. I guess you could say that I strive to follow his lead on all of these things. Most certainly I admire his skill at plotting. Things click together like puzzle pieces assembled by a master craftsman, but his plots aren’t usually predictable; events in the stories rise from the collision of motivations between characters. That’s certainly something I strive to achieve with my own fiction.

Next week brings the third and final installment of our interview, in which we talk about a variety of subjects including gaming and Howard’s newly released Pathfinder novel, Plague of Shadows.