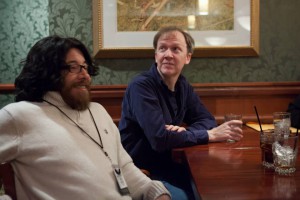 I’m back from ConFusion and working up a pretty detailed post about it for the Black Gate web site. Right now, though, I need to get to work, so I’ll just mention a few things in brief.

I finished Chandler’s The High Window on the way there and read most of Quarry’s Deal on the flight back. I was picked up by the mighty John Chris Hocking at the Detroit airport Friday and we had a memorable morning and afternoon wandering around Ann Arbor. Hocking is simply a princely fellow — he and his family are delightful people. Hocking gifted me with a stack of noir from his own collection (along with a Nate Heller book and Leigh Brackett’s No Good from a Corpse), and then picked up some more noir for me when we went to an award winning mystery bookstore, Aunt Agatha’s . I have additional details about all of that in the Black Gate article, which I’ll probably take live in the next day or so.

I may take a brief vacation from my noir exploration, though, as I returned from the con with a number of fantasy books. Brian McClellan and I traded volumes, and I picked up Matthew Thyer’s The Big Red Buckle and Jane Irwin’s graphic novel Clockwork Game. And I mean to read something by new friend Ian Tregillis as soon as possible, although that might take me right back into noir, albeit with a fantasy slant.

Tomorrow I’ll try to type up something about the panels I participated in and provide a link for the Black Gate essay, but for now I’ll just say that I had a fantastic time and get back to work. I am under deadline, after all.