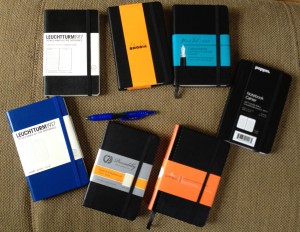 Sometimes I re-learn writing lessons without pain. Or maybe I should say sometimes what I know is a good writing technique gets confirmed, because I actually remember to apply what I learned.

Yesterday I had to run a bunch of errands on the far side of town. I grabbed my writing notebook just in case… and when I took the wife’s car in for an oil change saw that I’d be waiting a loooong time, because there were so many customers ahead of me. No worries, because I had the writing notebook.

Even better, I had some index cards. I got more plotting done there waiting for the oil change than I’d managed in the last month. Sometimes you have to have the right tools at the right time.

I don’t usually use notecards, but it’s a tool I’m aware of, and I know my friend Nathan Long uses them a lot in his own plotting. This time it worked like a charm for me. The middle section of the newest novel has been a little murky and I wasn’t sure about some of the order of events. I knew how things would start and how they’d end, and I knew a couple of other features. So I wrote each event down on a note card and as I thought about each and added detail, more events came to mind.

Once I had all the scenes written down a story arc started to take shape, both owing to logic (that can’t happen after this does, because then that dead character would still be alive) and just to dramatic momentum. The end result — the middle of the book is no longer a muddle and I’m eager to get started at revising/expanding it.

Once I had all that done I opened up the writing notebook and jotted a few notes about the overall flow and the arcs. Yay!