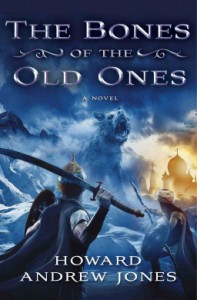 This morning I sent off my list of possible titles for my next Pathfinder novel to James Sutter at Paizo. I have a favorite from the bunch, but it’s possible that they’ll cook up a better one. It’s James who named Plague of Shadows, a title I not only like, but one that I think sounds like something I would have come up with myself.

The rest of this week I’ll be working on the business end of my writing career. I’ve heard from my editor Pete Wolverton that the bound copies of The Bones of the Old Ones are in, which means it’s time to start work on the marketing campaign. I’m hardly an old hand at this publishing thing yet, but I’m no longer wet behind the ears, and I now have a much better idea about things I can do to help get the word out.

Pete and my agent Bob Mecoy and I have settled on a series title, which means there’s a contest winner, but we’re still playing with the wording of it a bit (whether or not we should slap the word “chronicles” on the end, for instance). And that means that a contest winner HAS been chosen. I’ll be notifying him or her after we experiment just a little bit longer.

In other news, I’ve begun a second pass of the third Dabir and Asim novel, The Maiden’s Eye, and I’m very pleased. Normally I wait to edit until I’m through a full draft, but just before the 2/3 mark of the rough draft I decided to double back and shore some things up. I’m reading all the way through for the first time, and I think I’ve learned a few tricks since I wrote The Desert of Souls (probably while laboring over The Bones of the Old Ones!) because things seem to be sliding into place a lot more easily. That’s not to say that there’s no room for improvement, just that I can breathe a sigh of relief. It feels sometimes that I learn REALLY slowly, and if I saw I was still making the same kind of mistakes I would have been a little down.

Finally, I’m making plans for my trip to GenCon. This will be my third year in attendance, but my first on any of the writing panels. I’ll be sitting in on two of them Saturday the 18th. I hope to be able to attend even more of them the following year.

at 8:00 I’ll be on the Business of Writing panel with Jason Sizemore, John Helfers, and Elizabeth Vaughan. Here’s the official descrip:

What’s an advance? How much does an author get paid for a novel? Should you write a query letter? And speaking of query letters, what IS a query letter? Our industry veterans teach you the ins and outs of the publishing biz. Bring your questions, because we’ve got answers!

at 9:00 I’ll be on a panel about Traditional Publishing with John, Elizabeth, and fellow Black Gate alumnus Brad Beaulieu. Here’s the official descrip:

Most of the rest of the day I’ll be sitting at the Paizo booth with Dave Gross and Ed Greenwood, although over mid-day I will probably wander off for a bite to eat and to search the hall of treasures for, well, treasures.