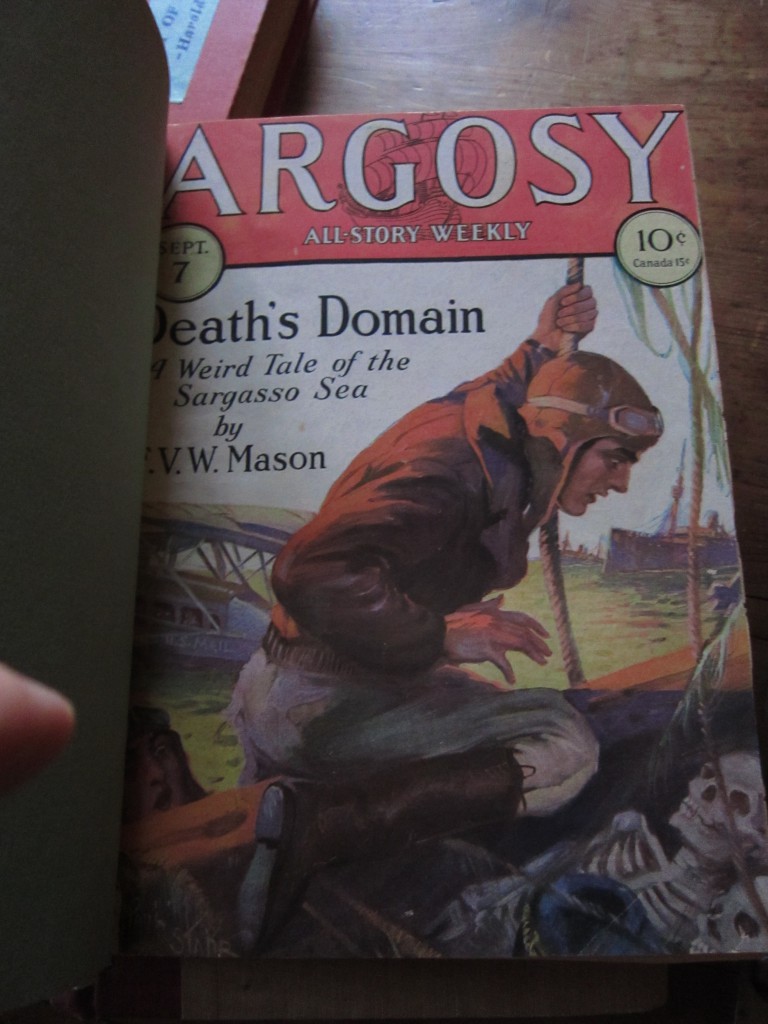 A couple of weeks ago I wrote about some of the treasures I had in the form of one-of-a-kind pulp adventure books. In amongst the mad rush of promotions week and holiday activities, I’ve escaped into some of those adventure tales to relax.

Pulp magazines have a pretty bad reputation, and I have to say that it is fairly well deserved. A lot of what they printed is pretty dreadful, and some of what passes for exciting popular entertainment in one era leaves a pretty bad taste in another. Take the story “Death’s Domain” shown in the picture to my left. Wow, was it a cracking good mystery story with all sorts of eerie elements… until the final third, when it became the most astonishing “beat you over the head with ugly race hatred” tale I’ve yet found in my pulp adventure reading. I’m pretty good at looking past stories as a product of their time and still enjoying them, but the depiction of… well, never mind.

My point is that I want to focus on some of the stuff these pulps did right, not what a lot of them did wrong. For instance, I recently read though a minor Argosy tale of the Yukon titled “Mail Boat” by Frank Richardson Pierce. Owing to the way I inherited these stories, and the fact that I do not have an index to Argosy, I am unsure as to when the tale first appeared, but it is by a writer I’d never read, and it is fairly minor.

It is also short, so I kept reading despite it’s somewhat wooden character depictions. I would describe the writing as “workman-like.” Yet, by the end, it got me thinking about writing more than the last several of these pulp tales I’ve read.

Written as they were many generations ago, these pulp adventures give us a window into a different understanding of man’s relation to the world. When the protagonist, deputy marshal Gordon, learns that he has to get back to town faster than the roundabout way the mail boat he’s on will take him, he just matter-of-factly heads off into the wilderness to find another way. He doesn’t bemoan his fate. Listen to what Pierce has him do:

Rupe Gordon, bent under the weight of his heavy pack, pushed through the mountain pass and dropped down to the headwaters of Mineral River. He shed his snowshoes and took to one of the ice-coated creeks. When the ice grew thin, he followed the bank to a point where stout willows grew thickly. He shed the pack and spent several hours cutting willows. He constructed the framework of a boat, which he bolted and wired together. He covered the frame with a canvas tarp; he melted paraffin, rubbed it into the canvas, making it just about waterproof. He found a heavy chunk of wood which he placed in the bow, to weight it down, then he pushed off and climbed in. Sitting crouched in the stern, he steered the craft with the heavy wooden paddle he’d packed over the summit.

It’s not pretty writing, but it gets the job done, and it has a vivid immediacy to it that a lot of today’s writing lacks. Many writers for Argosy and Adventure actually had been adventurers and described this stuff well because they’d done it themselves.

I am in no way suggesting that we all need to go out and learn to build canoes and shoot some rapids, but I do think I need to remind myself from time to time that when we create characters from other times that we need to recall that they have a different mindset. This character from a minor story takes simple, practical actions that most of us wouldn’t know to do, and the author doesn’t make a big deal about it, or the character’s emotions while it’s under way. Gordon just does what needs doing here. The journey back isn’t even the main focus of the plot!