I hope all of my visitors are well. Here we’re doing alright. I know many of my writer friends are finding themselves with MORE time to write, but if anything my own time is a little more fragmented.

Still, work is progressing on the third book. I’m deep into Act II, which is usually my least favorite part of any book to write. An informal poll among writer friends over the years has revealed a lot of us feel the same way. In the middle is when your doubts like to gang up, when you’re not sure you’ve got your pacing right, when you’re not sure the characters are acting quite right, etc. But of course pacing trouble and wobbly characters are going to turn up in the first draft. As my buddy E.E. Knight likes to say, give yourself permission to let the first draft suck. You’ve just got to get the story down and do the finesse work in the next drafts.

I don’t have as many doubts as I used to, and I’m not feeling mopey about the work, in part because I’ve done this enough times that I know the routine and in part because out there in the real world a whole lot of people have far more serious things to worry about… As I’ve written there have been some surprises and some changes despite my outline, and I sense another change in what I originally planned may be coming down the pike once I start Act III. After that, the third and final act feels like it’s going to stay about the way I planned. I’m hoping I’ll have a fully working draft by the end of next month. 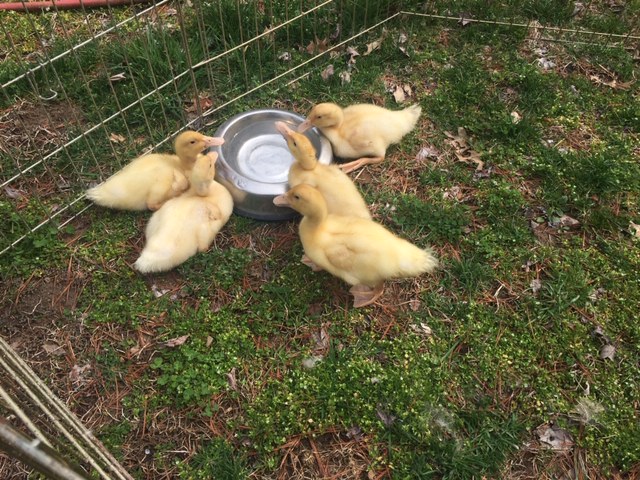 When not writing, I’ve been taking care of some new baby ducks, which are adorable and endearing in a way that baby chicks never are, because the baby ducks actually respond to your presence and interact with you. I took them outside the other day, with a portable fence around them so they wouldn’t wander too far, and wrote outside next to them. One of them has a strange  eye infection that I’m probably going to have to see the vet about. 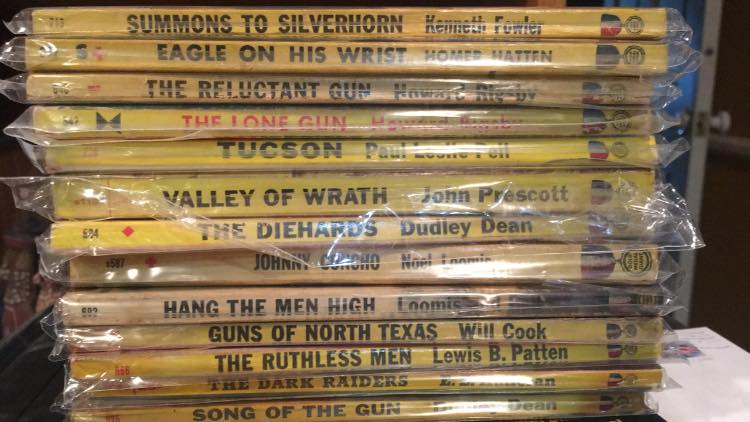 I’ve been reading stacks of Gold Medal westerns. Fawcett Gold Medal, back in the ’50s and ’60s, was well known as being a dependable place to turn for hardboiled detectives and noir masterpieces. It turns out that it was also a great place to go for fine western storytelling. Lean, smooth prose, lots of wonderful details about the horses and the environment and how to live in it, polished action sequence, no padding. I’m reading the things like potato chips.

For some reason the other day I finally taught myself the guitar riff to that late-early period Beatles song “I Feel Fine.” I’ve loved the song since I was a little kid. The lyrics can’t hold a candle to anything The Beatles were about to do in the immediate months following its composition, but otherwise the song is tasty pop perfection. Anyway, for no particular reason I now know how to play it. 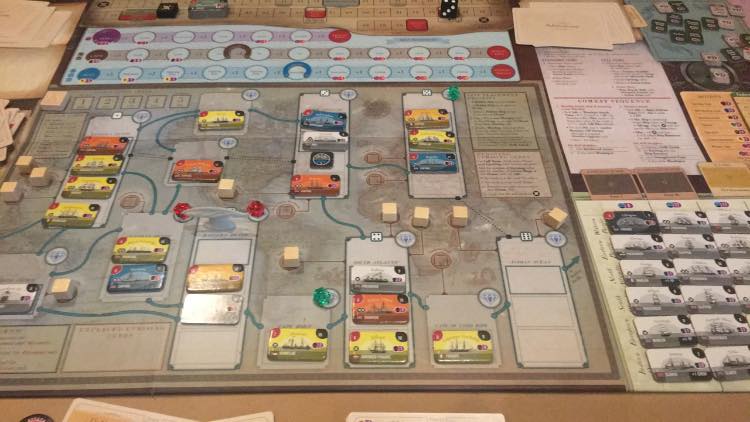 I’ve also played a few sessions of the solitaire boardgame Nemo’s War, from Victory Point Games. I have the most recent reprint of the 2nd edition. I can’t tell if it’s going to be one of my perennial favorites or not. In the game you play Nemo himself, and you’ve got to keep your mighty steampunk submarine afloat while the world’s nations try to sink you. In part they’re after you for your technology, but they’re also after you because you’re blowing up the shipping of the imperial powers and inciting rebellions.

There’s a lot in the box, including multiple variations on the game, depending upon what motives you choose, multiple difficulty levels, a number of different endings, and optional rules galore, especially if, like me, you snagged the three expansions when you joined the kickstarter.

It rewards repeated play and smart play. I’m just not sure yet if it’s for me for the long haul. I tend to think it runs a little long, on the other hand, I read on Boardgame Geek that the more you play the faster it gets, which I’m sure is true. It is definitely a lovely game, and there are hidden tactics and strategy to it, some for every motive. For more information on the game, including some reviews, you can look it up on its dedicated page at Boardgame Geek.