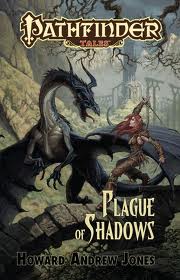 Maybe I should label this novel as “2.5” because I’d started my second Dabir and Asim novel, The Bones of the Old Ones, before I set to work on Plague of Shadows. But I set Bones aside and gave this one my attention all through the summer.

I didn’t write it as I’d written my first novel, in part because as a work-for-hire, I had to present an extremely detailed outline and get it approved before I started working. That meant I had a pretty solid blueprint, even though that blueprint ended up changing a lot as I went. It was a little harder than my first novel, but not so hard as the next one would be, probably because of that outline, one that a talented editor had provided me with feedback for.

Why was it a little more difficult? Well, the characters and their relationships were all brand new to me, so it took a little writing and rewriting to get used to them and how they’d react, something I hadn’t had to do much with The Desert of Souls.

The most obvious lesson in writing Plague was to be flexible. Somehow I managed to roll with the punches on this one far faster than I’d roll with challenges in later books. I was about a third of the way into the draft, about 30 thousand words, when I heard from James Sutter. James, by the way, is a great editor — and a talented writer as well — and this wasn’t at all his typical way of communicating. But the Paizo Pathfinder novel line was new, and they were still working on marketing. He said that they had realized that novels with dragons on the cover sold better and asked if I could work some dragons into the plot. I said sure, I already had one, but he wondered if I could have a big fight with a dragon. So I said sure, why not? And I found a way, and I think it ended up strengthening the book. 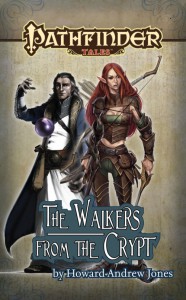 That’s a nice thing about James — he’s always been dead-on accurate with his suggestions for my work, and his ideas always strengthened the narrative. This one did too, even if it wasn’t founded on character action and development, as his feedback almost always is otherwise.

I also learned I could vary my approach. I structured the novel with two parallel arcs, one set in the past and one in the present, with key moments from the arc in the past turning up at just the right moment in the present so readers could — hopefully — see how the present got the way it was. It was a method of not frontloading the backstory, revealing only what was necessary at the time. I’ve never done it again, although I tried it with an earlier draft of a later book. It worked here.

The other lesson I learned was that people aren’t always going to take away from the novel what you intended. Some of the reactions to The Desert of Souls confounded me, yes, but some of the reactions to Plague of Shadows confounded me more. When it came to unkind comments about Desert, it was from a handful who thought that the characters were wooden, I think because Dabir and Asim don’t spend time discussing their internal states, or that there weren’t enough women in my novel about how a close friendship develops between two men.

The responses to Plague, while mostly positive, ran the gamut. Some saw it as an adventure romp with a little more character depth and some surprising turns, which is what I’d been trying for. Others didn’t see anything special in it at all, or took issue that with this or that game related thing, or umbrage that it wasn’t as they’d expected or that there wasn’t enough magic, or what have you. Honestly, some of the dismissive reactions or criticism that felt just flat-out wrong were a little hurtful. I learned not so seek out reviews and, most of all, to develop a thicker skin.

I also learned that tie-in novels just don’t ever get as much review time as creator-owned novels. I thought I was going to be okay with that after I got over the surprise, but I’d realize later, with another Paizo novel, that I wasn’t. If you’re going to be writing them, you’d best get used to that.

I also learned that yes, I could write more than one kind of story, and that I could write third person as easily as first person. I gained confidence, and I thought I could write novels quickly. When I returned to drafting the next Dabir and Asim novel I was to learn that just wasn’t true.