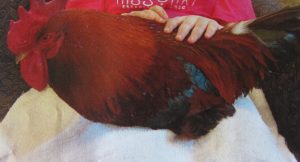 One evening this spring while I was finishing up some yard work I spotted a fox slinking through our pasture. If you don’t keep chickens you might not know that foxes love chickens. When we first got started raising chickens we lost a number to clever foxes, who are in on the secret that chickens are delicious. Our birds are free range, but we keep a dog in part to protect the chickens, and we keep the birds inside a coop in the barn except when it’s full daylight.

As it happened, though, dusk was on the way and I hadn’t yet done anything with the chickens because I’d been trying to finish some work on the fence. The dog was inside because she hadn’t been keeping far enough away from the mower. My wife ran to get the dog and I sprinted to find the chickens, only to discover that our rooster was already rounding them up and herding them into the barn.

Roosters really only have one job, and that’s to watch over the chickens. Most roosters don’t manage even that. They just stand around crowing, constantly, and just as constantly mating with the hens. Big Red, though, actually took pride in his job. In my experience there’s not a whole lot of personality difference between chickens, and I haven’t really formed many attachments with them. Big Red was far and away my favorite. You can’t help but respect someone who’s good at their job, even if he’s a chicken. I saw him herd the chickens several times when stray dogs wandered onto our property. 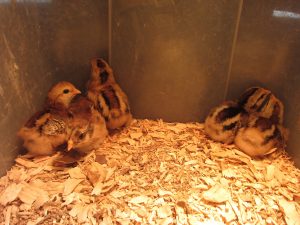 In addition to being a good watch bird, he was also gentle when my kids wanted to pick him up, and wasn’t stupidly aggressive against humans or the barn cats, another thing you can’t take for granted. He was also a lovely bird.

You notice I’m writing in the past tense, and that’s because something, a fox we think, finally got him. It happened one day while the dog wasn’t outside. A fox must have nabbed him, because there was nothing left but some feathers. (A loose dog wouldn’t have carried off the body — they’d just have killed and gnawed a little and left.) But the chickens had made it safely back to their roosts. I can only assume that he fought off the attack in a brave last stand so his flock could get to safety, for I know darned well that the fox wouldn’t have targeted the largest bird.

Here’s to Big Red, a brave rooster who took pride in his job. We all liked him so well that we allowed one of the hens to brood over a clutch of eggs to see if we can get another from his bloodline with similar characteristics. Five hatched late last week.