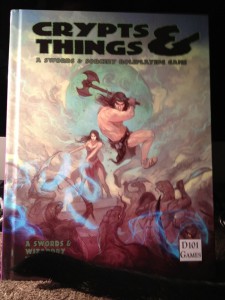 It seems that all I do with my writing anymore these days is revise. Back when I was writing in my teens and twenties I used to just keep picking away at the first three or four chapters of a work and never advance. Recently it seems like I get the first three or four chapters working pretty well but then take too long getting to the good stuff. No more. Just as I prefer streamlined role-playing game systems I’ve decided to strip away any sense of the padding I hate and get to the good bits right up front.

Regular readers of my blog might have seen me writing about parallel plot structures and all that recently, but despite my tinkering and tinkering I just couldn’t keep it interesting enough, so I’m gutting some work. An awful lot of work, really, but if the work isn’t really good, why subject my readers to it? I’m upset that I didn’t notice sooner, but I guess I’m glad my editor and wife and I noticed now, before it went to print. The next series needs to be better than competent. It needs to be me at my best. How long will it take to correct? I don’t know. If I’m really passionate, though, it shouldn’t take THAT long.

In other news, over the weekend I finally sat back with Primeval Thule and found it one of the finest game setting I’ve ever read. I hope they release a Swords & Wizardry version of it soon (due to me preferring simpler rules systems). I liked almost everything about it except the inclusion of halflings and dwarves, but a reader can simply replace them with human tribes. I loved what the writers did with the Elves — they have a real Melniboean vibe. Honestly, I don’t know that I’ve had this much fun reading a setting since I poured through Talislanta. The writers really GOT sword-and-sorcery and what makes it different from epic fantasy. 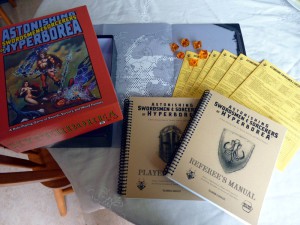 Speaking of which, I was leafing through some game books and it occurred to me that most of the old school role-playing games don’t get barbarians. Apart from Astonishing Swordsmen and Sorcerers of Hyperborea and Crypts and Things none of their writers seem to actually have read any Conan stories. They equate “barbarian” with “berserker.” Conan never once lost his cool and launched into a killing frenzy, but he did do lots of sneaking and climbing and wilderness stuff. The creators of the aforementioned games are the only D&D simulators who do a good job of emulating that.

Speaking of Crypts & Things, the new revised edition is in its final day on Kickstarter, so swing by and sign in if you want to support a nifty rules system.